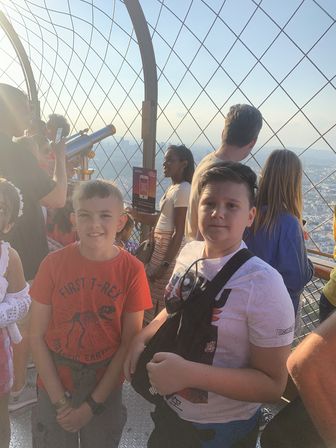 Barni and Tomi had the same wish, for which they both patiently waited two years. We traveled together with the children and their parents.

We met before the long-awaited departure day because our plane left very early the next day and we all live several hours' drive from Budapest. Fortunately, we had the opportunity to spend the evening at the airport hotel. This gave us some time to get to know each other, and talked about our plans and I replied to all the questions while eating our delicious dinner. We all agreed that we are looking forward to the departure and the many experiences that await us.
Two very nice young men who work for WizzAir helped us with the early departure.

The first person to help us was Bence, with whom we had already agreed by phone the day before where and when we would meet. He guided us through check-in, and baggage drop-off and accompanied our small group from the bus to the plane. The surprise only started after the captain announced the names of Barni and Tomi on the plane, that he would welcome them on board separately. Afterward, a very nice and helpful steward, Zsombor, talked to the two boys separately and gave each of them a gift in the name of the entire flight crew, in a package signed by everyone. It was very touching, even for the parents. We guessed that they knew about us, but none of us felt that kind of kindness. 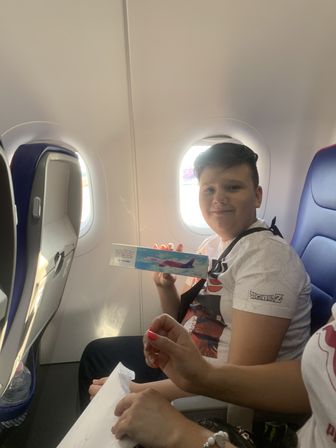 Tomi and his mother flew for the first time in their lives. Of course, we managed to arrange that Tomi could sit next to the window, and since we were sitting up front, the wing didn't interfere with the perfect view, and due to the clear sky, neither did the clouds.

We arrived in Paris, where none of them had been before, so everyone got to know the main sightseeing spots before we continued to Disneyland. Seeing the Eiffel Tower was a special experience.

We traveled to Disneyland on the RER, which took us straight to our destination. Upon arrival, we first got off the "train" and tried to grasp the scale of the place. We arrived at a large square, from where we tried to get to the accommodation at the Disney Village. We saw noticed that the entrance to the famous, big destination was very close, as well as to the Disney Studio (which I didn't even know existed a few days before the departure), but we weren't headed there for the time being.

The biggest surprise was the hotel, or more precisely, there were 3 hotels on the shore of a lake, one of which had the accommodation, which was decorated with a nautical theme (the other was New York and superheroes, and the 3rd, forest-bear-nature...).

We took another quick rest and the awaited “miracle” arrived in the early afternoon… we entered Disneyland. Everyone had ideas and fantasies about how it is going to look and feel to be at Disneyland. It's hard to describe what awaits you there. On the one hand, there were a lot of people, on the other hand, beautiful we saw beautiful buildings everywhere, as I imagined a small town in the 20s in the USA, with themed park areas (Wild West, Aladdin, Mexican, pirate-rocky, for little girls, for small children, Star Wars...), and the right in the middle of the park there is the Disney castle.

The children first targeted the first big roller coaster... and then the next one, and the one after that, and in the meantime, we also looked at the smaller attractions, but after a few hours, everyone had their favorite roller coaster, attraction, and topic of conversation. There was a separate roller coaster in the mine, on a mini-steam train, Indiana Jones style, which also stood on its head, Pirates of the Caribbean went on the water, and underground, but the fastest, every mother’s nightmare was Star Wars, which was almost entirely in the dark went…


In the evening, we had a buffet dinner during which we discussed the next day. The plan was to visit the Disney Studio, which is a little smaller than Disneyland, and where the Marvel heroes were housed, of course almost all of them included a roller coaster. We were also in the Tower of Horrors, which took place in a broken elevator of a haunted hotel..., here we learned what free fall is in a few seconds that seemed to last forever.

On the second night at Disneyland, everyone watched the night show at 11 pm. We concluded that the reason for the late show being so late is because it is not completely dark at 10 pm. The light show is a great experience and it is the perfect ending to a day at Disneyland. A short story of the Disney characters was projected onto the castle, which was made unforgettable for everyone with a fountain play and fireworks, while, of course, soundtracks played during the show.

The following day the time has come to return home. After a delicious breakfast together, we decided that everyone already knows the main places, routes, and attractions in the park, so we went on our separate way for a few hours that were left until the departure of the airport shuttle bus. Some wanted one last big roller coaster ride, some tried to get Thor's hammer for their brother.

The trip home went smoothly and quickly, almost everyone was a regular passenger and everyone was thinking more and more about how good it would be to return home and tell the family about this great experience, which I don't think can be processed in such a short time. Even after a long time, these wonderful memories will bring a smile to your face.