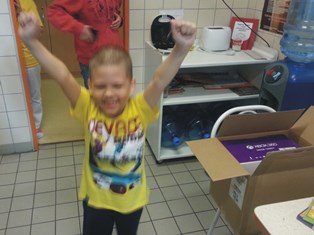 Oliver has asked for an X BOX 360 and a car-racing game from Csodalámpa Foundation.

We arrived at the hospital at the end of his treatment so Oliver was able to move around freely in the hallways. He did not know about our visit so it was a total surprise that we were there to give him the gift box. He started to open the package with great anticipation…

When Oliver saw the X BOX package, he started jumping thus expressing his joy and excitement. Other young patients in the hospital came to see about the sounds of joy they could hear. Oliver took out the gift of its box and he wrapped his arms around it.

"This will be my best toy and tomorrow, I will play with it the whole day" – said Oliver with a huge smile. We were talking for a long time and we learned that he bravely endured the treatments while always smiling and happy.
Later, he called his grandmother and he told her what an amazing, great gift he had received that day from the Csodalámpa Foundation.

It was truly great to see Oliver receiving his present with childlike joy. 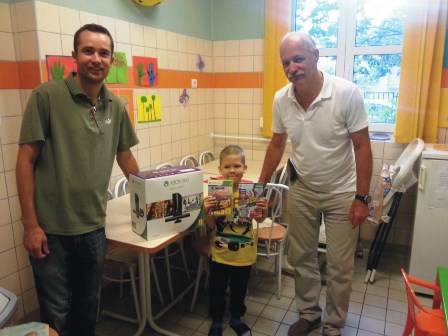 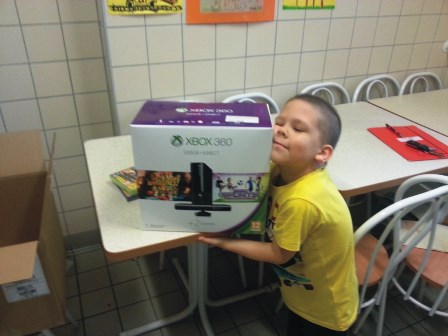 We and Oliver would like to thank the lovely "Magic bugs" of PwC for their support! 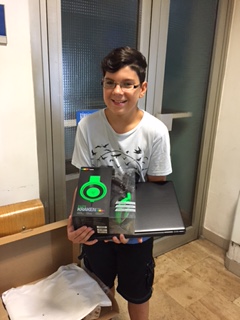 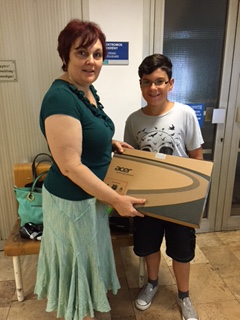 Andris had been already over his illness, he arrived just for a medical control to Budapest on this summer day.

Taking the opportunity, we made the boy happy with our presents. After thinking a long time, Andris decided to ask for a laptop with special headphones from the Foundation.

Photos tell everything, we could make him really happy.

His mother told us: "Yesterday Andris got the present which fills him with a magnificent happiness. I would like to thank both of you and the supporters."

Áron is a real sportsman, he does several sports as climbing but high cliffs were also conquered by him.

Nowadays, due to his illness he can not do sports regularly, and he also has to learn the school material as a private student. Therefore Áron asked for an Ipad Airs from the Magic Lamp Foundation, which can help him to get to know a lot of information and he can also keep in touch with his friends and school mates.

We were welcomed on the terrace of the hotel by Szilvia Németh and Ádám Honvéd, representatives of the Hilton Budapest City. While we were talking, Áron installed the machine confidently and we, the adults just wondered what a smart device it was. Time passed quickly and the teenage boy became very tired, so we said goodbye to him and let him go home to use his new Ipad conveniently at home.


Many thanks for the support of the Hilton Budapest City and for the donations offered by the guests of the hotel.

Niké has been staying at the hospital for month, even now she is waiting for some serious operation.
When she learned that she can can have wish with Magic Lamp, she was very happy.

After some thinking she decided on a laptop computar, as she can use this not only for her studies but also to keep in touch with her friends while in the hospital.


Although we saw that she was very happy with the beautiful present, we of course respect her wish that only pictures of the computer should be published on our homepage.

We would like to thank the support of the management of the Hilton Budapest City in the name of Niké too.