Csongor's wish was from the Magic Lamp to organize a visit to Kidzania Park into Moscow. His father used to study there and the boy was eager to see how Moscow looks like...

His wish has been fulfilled with the help of the director Mr. Adrian Gray of Lotte Hotel Moscow.

I met a 10 years old excited boy at the airport in Budapest on a Friday morning . His name was Csongor. He has never flown, yet. We arrived in Moscow after a pleasant flight, and Csongor enjoyed the flight.
A car of the Hotel Lotte was waiting for us and took us to the hotel. The director, Mr. Adriann Gray and his colleagues were waiting for Csongor with a surpise gift and fantastic programs.

A travel guide, Elena showed us the most important sights in the city on the first day: the Red Square, the Kreml, the Vasily Blashenniy Church and of course the GUM Shopping Centre. Csongor knew if he drops some Rubels into the fountain of GUM ,he will return into the city, so he did it.

The next surprice was the Museum of Astronouts. Csongor liked the spaceships, the film about the training of the astronouts and the stuffed dogs, like Laikta, that were used to flight test of the space ships.
He looked up and foun Farkas Bertalan's photo as well.
The museum made a surprise for Csongor, too. He was allowed to put on one of the spacesuits.
His father took some pictures about him, of course.
There was no end of this day.
We went to the Marmor Palace, to the Armoury. He enjoyed them very much. We saw the Changing of the Guard at 6 o' clock, too. Csongor returned to the beautiful hotel rich in experience but a little bit tired that day.

The high point of the next day was the Kidzania-Park. He could fly an airplane. He learnt to drive a car and got a driving licence, which is valid in Kidzania for 2 years. He worked as a fire man and he fought a fire. He was a serviceman as well and repaired wheels. He made joghurt in a milk factory.

Csongor enjoyed everything very much. He always said: " It is great!" He went with sparkling eyes to the next program, which was a boat trip on the river Moscow. he said: " It is fantastic! ". Before going to bed he swam a little bit in the Wellness of the hotel. He could hardly go asleep from the lot of experiences that night.

We visited some beautiful metro stations on the last day. Csongor admired the huge buildings and the huge traffic on the way to the hotel.

We gratefully thank in the name of Csongor Mr Adrian Gray and his colleagues of Lotte Hotel Moscow for the hospitality and support thay did for Csongor. We also want to thank the support of FGSZ Földgázszállító Zrt. allowing us to realise Csongor's special wish.

Csongor' own handwritten report tells more about his joy than we ever would be able: 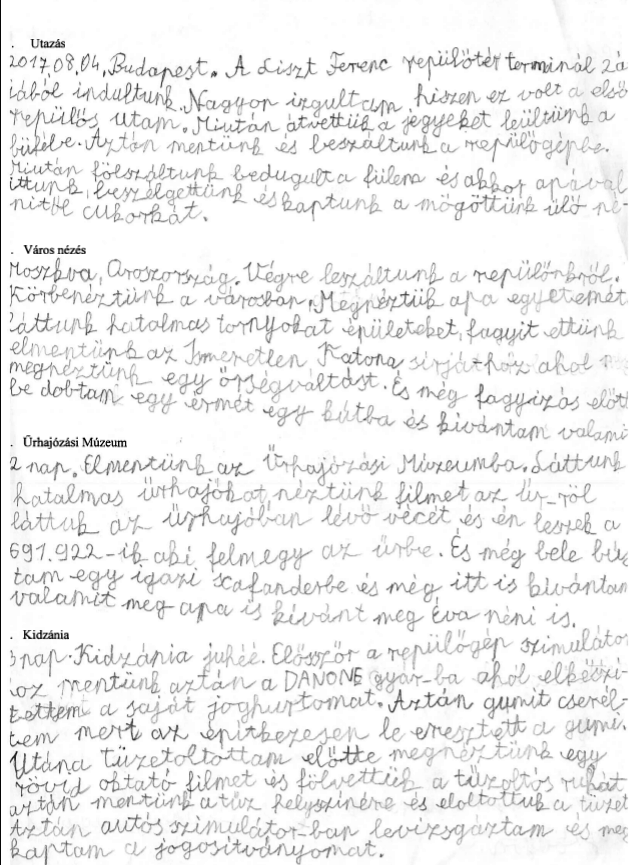 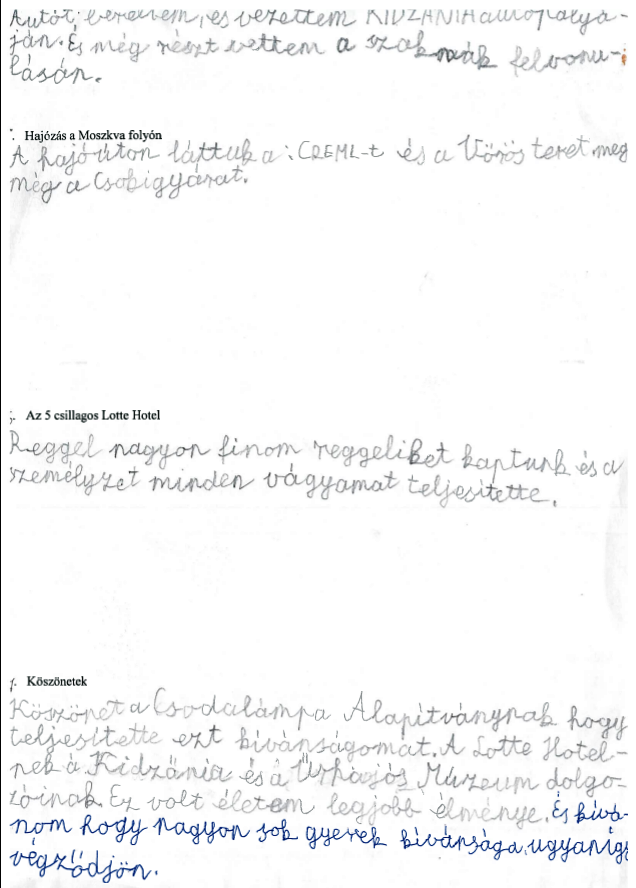 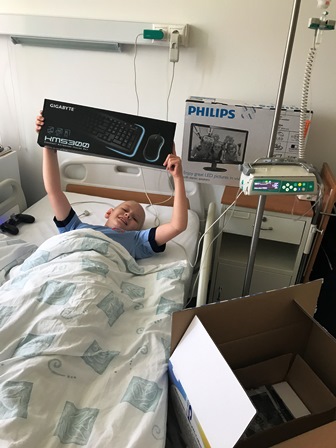 Bence was thinking about what he should wish for for a really long time. He even changed his mind once.

Eventually he decided on a desktop computer. It will belong only to him, he can use it any time to play games, watch movies, surf the net, and keep in touch with his friends.

After conspiring with the parents, I entered Bence's room unexpectedly, carrying the big boxes. He was lying on his bed, recovering from a serious medical treatment.
Seeing his face I felt that I came at the right time. His sad eyes brightened up immediately when he noticed the package.

We helped him to open the box, and when the monitor and the keyboard emerged, Bence started to weep.... and so did we..

It was so good to see his immense joy and I relaxed seeing that we managed to divert his attention from his ordeals in the hospital.

We would like to thank our private donors, including the the generous guests of Corinthia Hotel Budapest for making Bence's wish come true.