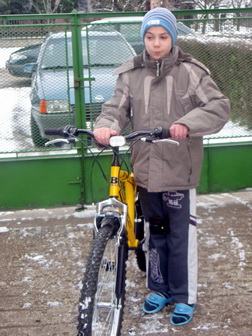 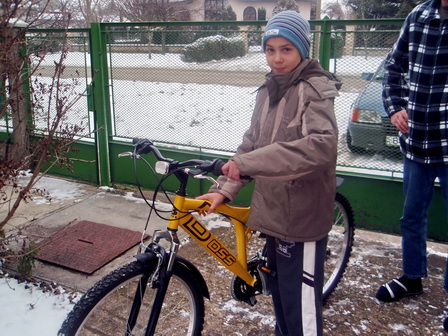 Martin had a very good feeling when he saw a van in front of their house. The wished wonder -bike has arrived!!! He ran out of the house and there was a beautiful lemon- yellow bike in the garden.

He wanted to receive the same bike. “It is great and very beautiful”-he shouted.

Unfortunately he could not try it because it was cold and everything was covered with snow and ice. But his dad carried it into the hall and the boy wondered it there and he said with bright eyes:
“I will go to school by bike in spring and I will care of it very much.”

Use it in health for a long time!
Thank you Mr. Frankl Endre for your help, which helped us to realize one of the ill children’s dreams. 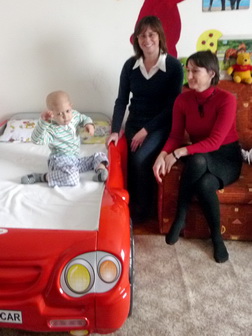 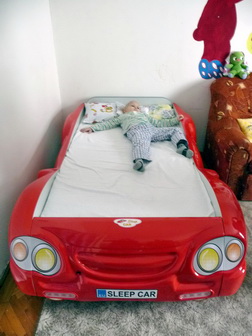 Dávid’s hobbies are the cars and the computer games.

When we arrived in Hajdúhadház he had been playing computer games. He showed us his wonderful wonder-bed, which is a huge red car. He received it from the Budapest Bank supporter.

The happy boy switched on us the lamps of his car-bed.

Dear Dávid! We wish you beautiful dreams in your fantastic new bed.


Dear staff of the Budapest Bank thanks you for your help. 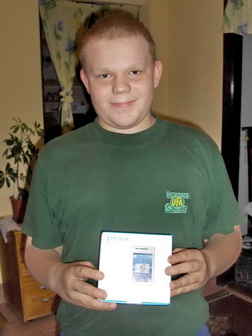 Laci is a 12-year-old cheerful friendly boy. He knows the world of technique very well. That is why he decided on a “clever” mobile phone.

He was deeply touched because he didn’t count on this phone this year. He was very surprised when he could keep the wished phone in his hands. We recognized in short time that he is skilled in phones.

He talked to us of course with pleasure. We met his mother and brother naturally and we talked to them cheerfully.

Thank you dear Szabadics Éva for your supporting! 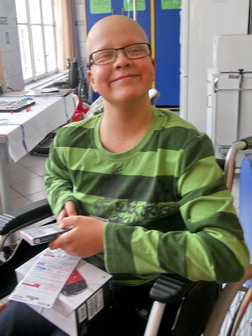 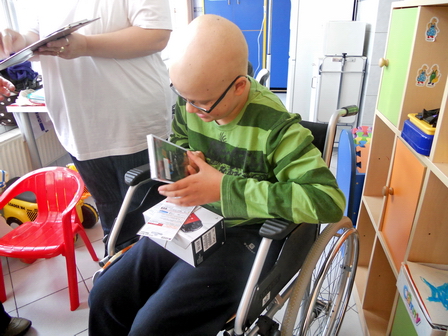 On this day Kálmán had to return to the Tűzolto Street II. Pediatric Clinic of the Semmelweiss University for his next treatment. However, he had no idea that beside the painful treatment a joyful surprise was waiting for him.

Kálmán had wished for a PSP. The students of American International School of Budapest offered to help and organized the "Walk-the-Wish" event that raised the money for the PSP, among other wishes.

Kálmán received his gift with a big smile on his face, and with some help started to play with it right away.

We would like to thank the students and teachers of the American International School of Budapest for their generosity.
Dr. Jenei Tiborné
wish-coordinator
Budapest, December 6, 2010

A few days later we got this e-mail from Kálmán:

We would like you thank you very much for the PSP. Kálmi had been waiting for it so excitedly. He plays with it all the time, in fact he hardly ever puts it down. Could you please pass on our heartfelt thanks to the American School in Nagykovácsi? We regretfully were not able to meet them.

We wish you a very merry Christmas and a happy and peaceful New Year! 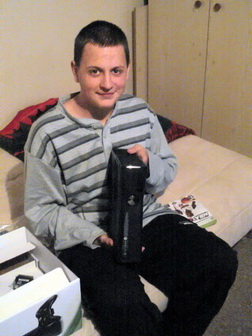 Marci was very exiting when he was waiting for us. He thought we would speak about his wish.

When it turned out we won’t speak about his wish but he is the happy owner of a XBOX he was so glad he hardly could open the parcel. The play was installed in a short time and he could play.

He received a basketball game, too, which was the part of our gift.

We could realize again one of our ill kids’ dreams.

Thank you dear Szabadics Éva for your supporting!

We have learnt about the wish of our small hero Gábor this autumn: he wished to get Star Wars LEGO.
His twin brother Péter and Gábor are real LEGO masters by their parents’ opinion. They like to build different LEGO-objects and they already have a lot of similar toys. When they begin to plan what to build and how, the world ceases to exist around them...

Gábor’s dream was realized with the help of the students of the American International School of Budapest.
All the students and teachers of the school were waiting for this day, not only because of Gábor’s wish but there was an extraordanary students’ meeting where the professors said thanks to the students who took part in the „Walk-The-Wish”.
We showed in a short presentation which wishes have been granted since the last „Walk The Wish”. With their help Virág has been to London, Zsolt has received a camera, Robert has got a PSP, Sandor has got a laptop.


We told Gábor that the students had wanted to meet him personally and they waited him with some present. He listened to their reports patiently, watched the film about the walk. The students and their teachers even composed and sung a special song for Gábor:


After watching the film Gábor had to go to the stage and the wished toy was given him. He was so surprised that at first he could say nothing, but then he bowed to the chering crowd and just said "thank you".

The real surprise came some minutes later.
The older students waited for Gábor and Péter with a cake forming a big LEGO structure as they celebrated their 10th birthday on that day. The cake was made by the wife of one of the teachers. It was a real masterpiece. It weighed 10 kilogramms as the boys became 10 years old. Of course Happy Birthday was sung in Hungarian and English languages, too.

Gábor reacted with a joke: "When I will be 20 years old I shall get a cake weighing 20 kilogramms."

We hope this day and the gift will remain unforgettable for Gábor and they will help Gábor during his difficult times still to come.

We wish you Gábor a fast recovery!

We would like to thank the pupils and teachers of the American International School of Budapest for granting Gabor's wish. 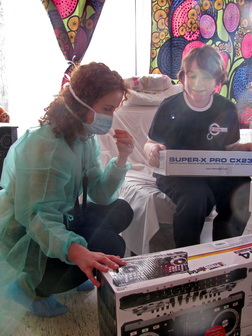 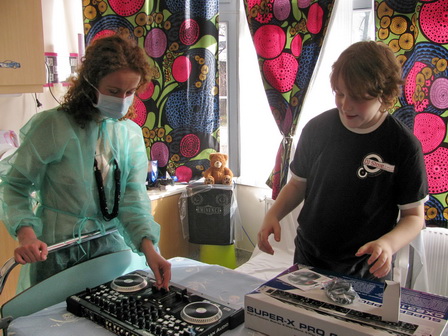 Matyi is the resident of the half-sterile room of the Szent László Hospital many months since. He is interested in everything which is in connection with computers, sound-technique. He would like to be a sound-engineer therefore it is not surprising that his desire was a console.

We made his surprise together with the donating company’s one colleague.

He was looking amazed with his eyes wide open when I appeared with a person who was a foreigner to him at the door of his room. He could only understand what is happening when found in two huge boxes from a pouch. One of them included the mixer, the second one included the crossover.

Matyi was almost speechless the amazing surprise crush. He was only smiling and could say only: „wow”. His gaiety was only increasing as he was opening his present. After unwrapping it he assembled it immediately. Meanwhile he was telling to us what, where, why…, we did not understand a word from the whole…

After a while Matyi’s favourite singer – made the room disco atmosphere – rang through the speakers.

I think Matyi won’t be bored for a minute then, during the long weeks of his recovery and I hope that soon the rooms’ windows of his home will tremble from the songs of Lady Gaga.


Thank you for the support of