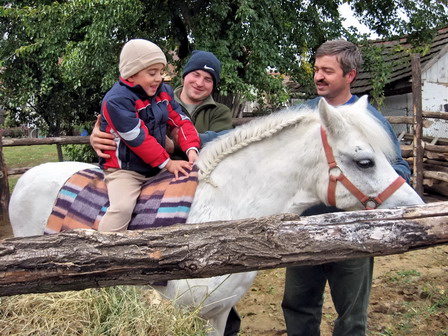 When our field manager in Debrecen first met Imi she found a quiet, timid little boy.

Gradually Imi opened and told her that he loved animals and for quite a while when he closes his eyes at night he has a wonderful dream: he is riding a beautiful little white pony that is his own. He is petting it, stroking it and when riding it asking him to help his recovery.

Our field manager got in touch with Imi’s doctor and the management of the Wonderlamp straight away knowing how wonderful this wish is and how much it could help cure the little boy. Nevertheless it meant quite a challenge for the Wonderlamp.

All the same we very soon got ’green light’ and real team work took a start. Everybody was searching for the little pony of which little Imi had been dreaming.

Our volunteers in Debrecen were looking for the right solution, bearing in mind that it would have to be near the little boy’s dwelling place to make transportation easier.

And then help came from a place where we would never have dreamt of (well, even the people at Wonderlamp have dreams!).


The beautiful little white pony, Hópihe at the Budapest Szabó & Sáli Pony Riding School who had had so many little riders at the riding school that he had got a little tired and so ’decided’ together with its owners that it had grown out of the school and was to look for a new master.

This is how Hópihe temporarily got into the ownership of the Wonderlamp with the help of the American International School of Budapest and the good will of Budapest Szabó & Sáli Pony Riding School waiting to reach his new master: little Imi in Létavértes.

All that was to arrange now was the transportation which is not a very easy task as it takes a special vehicle and a driver who can drive carefully and can get Hópihe to Létavértes in safety where the new stables were already waiting for the little pony.

Fortune again was on our side I must say. No sooner had Mr Farkas Bethlen in Verőce heard about the little boy and the little pony than had he offered to lend his own horse transporting vehicle. Not to speak of Mr Ádám Dudits head of SAP Labs Hungary who had done jobs like that several times before who offered to transport Hópihe to Létavértes. 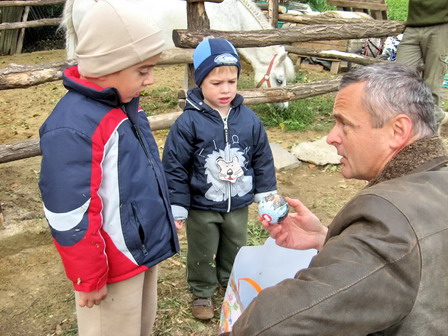 We sat out with Hópihe early Sunday. Mr Dudits proved to be an excellent driver. We arrived at Imrus’ place in about 3 hours. In the meanwhile Katalin, Mrs Ferenc Kiss, the field manager of Debrecen had also arrived. We were so glad she could make it on a Sunday as the volunteers of the field had helped so much so that the Genie of the Wonderlamp could fulfill the little boy’s wish.

The parents were expecting us but Imrus wasn’t suspecting anything at all. When the vehicle with the trailer parked in the yard the little boy and his little brother Janika were just standing there, mouth open, wondering what it could be inside.

And when the beautiful white Hópihe gracefully paced out in the glittering sunshine the little boy ran to his mother and burst into tears. It took quite a few moments for the little boy to come round from his astonishment, but when his father and godfather led the pony into the stables he carefully followed them, picking up some hay and giving it to Hópihe.


Then we hung on the stables door the little plate decorated with small beads by the children at the Budapest Riding school with the name of Hópihe.

Little Imre’s parents invited us to dinner. Although we didn’t want to disturb the solemn atmosphere we accepted to stay and must say we had had a wonderful meal. After dinner we said goodbye to the family and parted from Hópihe heartbroken but it was a satisfaction to know that Imruska wouldn’t have to dream with eyes closed any more, his dream had come true.

It was most touching to see how the little boy got more and more relaxed and stroked and petted Hópihe whose telling look was saying: here I am my little master, you have nothing to fear, together we’ll overcome any difficulties.

Dear Little Imi, we hope you will ride Hópihe as happily as happily the Wonderlamp team fulfilled your wish.

and the support of Mr Farkas Bethlen. 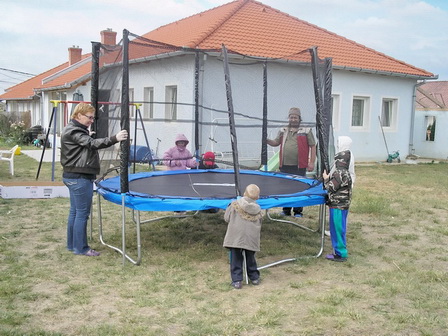 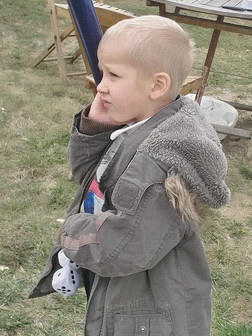 Bálint is a 5 year old little boy from Nagykozár who turned to us with his wish for a springboard.

As he is very often in hospital he can only spend little time with his siblings. For this reason we tried to act very quickly to help his recovery.

Luckily we had found a springboard in no time and were only waiting for the right time to hand it over.

On the big day when we arrived it was Bálint who answered the door and he knew straight away why we had come. Though a little alarmed he let us in but could hardly wait for us to set up his springboard. No sooner had it been done than he climbed on it and started jumping. A little later his siblings joined him and they all played late in the afternoon.

Dear Bálint, I do hope you will find your springboard great fun. Let it serve your recovery.

and to Brankovics Boris employee of Hervis Sports Ltd for assembling the springboard fast and safe.


This wish has been granted with the support of

Many thanks in the name of Bálint too! 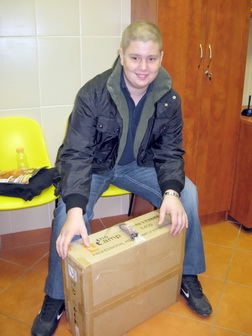 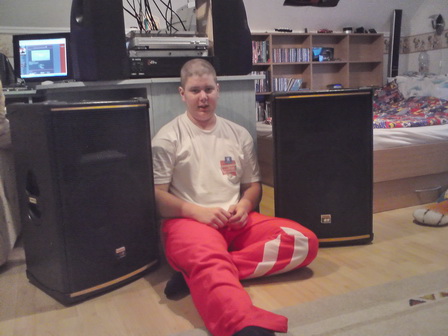 Tamás, the teenage boy is a serious young man. It was in the summer that I had talked to him about his plans for the future and he revealed his secret dream: as an amateur sound technician he is longing for a music realm of his own, and all he is lacking is an amplifier and appropriate loudspeakers.

We had no idea at the time how difficult a task was awaiting the genie of the Wonderlamp as it turned out that we were to find the right type of loudspeakers which could be fitted to his already existing apparatus.

Thus we had to connect the two experts: the shop assistant from the music shop and Tamás himself and find the right combination. Tamás was by no means aware that his wish would come true almost immediately after the telephone call as we had misled him by saying that it was only to make sure that the genie would not make a mistake when fulfilling his task.

As Tamás is only visiting the hospital in Tűzoltó Utca for control tests we had an idea that his dream could come true right before the blood test the next time he was going, that is I would hand him the serious sound technical equipment he had been dreaming of.

For a minute it seemed that this dream will remain a dream because at the Wonderlamp there are no weightlifter (volunteers) and the two loudspeakers and the amplifier proved to be so heavy that it was absolutely impossible for one person to carry. But for the Wonderlamp nothing is impossible so by the time Tamás and his mother arrived at the hospital the less heavy amplifier was hiding in a surgery at the out-patient department. I sneaked in and called Tamás in over the caller.

He was extremely surprised when I uncovered why he had to come in. The teenage boy could only smile and mutter „Oh, I really wasn’t expecting anything like this” and turned red in excitement.

Well the amplifer was lying at Tamás’s feet to amplify his courage to undergo the test but the loudspeakers were to be taken from the music shop as a prize after the test.
Then there was nothing left but the installation and putting in use of all in his home.

I can’t imagine where Tamás’s parents escaped when he had finished with the technical task and tried out the complete studio.
We would like to thank all participants of 18th CEO Summit for having supported the wish-fulfilment of Tamás. 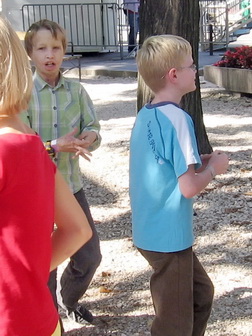 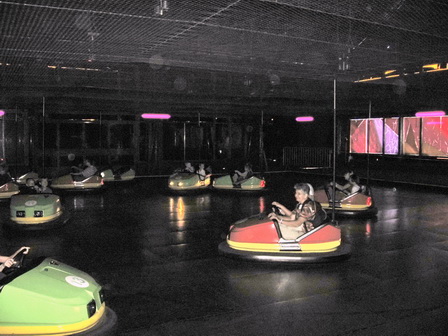 Peter is a 11 years old boy from Székesfehérvár and his wish was to spend a day in the Amusement Park of Budapest together with his friends.

I was touched by his wish: sometimes – but not so often – it happens that a kid also wants to make his /her friends happy with the opportunity provided by Wonderlamp. The reason is more touching: Peti was suffering from burns and he spent 8 months in hospital. Although he was an excellent student, the family - against his will - had to look for a new school. Luckily his new classmates don’t care for his face, which unfortunately cautions them forever that fire is an extremely dangerous thing.


On Monday, 27th September 2009 a joyful, decent and a little bit reserved but excited team arrived to the 8th platform of the South Railway Station. After a quick introduction, we left for the Amusement Park. The weather also knew that this date was important, so the smiling Sun was on duty and fortunately clouds, rain and wind had a day off.

At the entrance we had to wait for a while as certainly we were not the only people waiting for admission this nice autumn day. After getting the arm-bands at the entrance (in different colors according to our height), kids had only difficulties to decide where to go first and how many times to sit on the roller coaster, to wobble in the barrel, to jostle with the dodgems, to have fun in the mirror room and to enjoy the other interesting attractions.

Around at 1.00 pm kids felt empty, so we took a rest in the restaurant of the Amusement Park to have a pizza lunch. After the tasty food I got decorous thanks from the children and the team runs away. I could hardly find each ones by the moment of the farewell. Instead of the cloudless joy, even more the excitement of the eventful day reflected on the face of Peti, but it goes without saying in this situation.


I hope that part of the day we didn’t spend together was as enjoyable as the time the children spent with me.
We wish all of you good health.