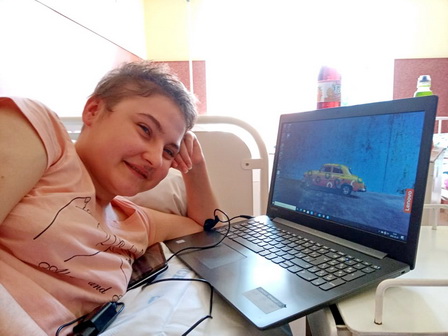 While hospitalised and under constant treatment Anna could only lay in a bed. She was not even allowed to stand up. The all-day resting made the time in the hospital long and uncomfortable...

A laptop can be used in many different ways. It can help you to bear with the time you have to spend in the hospital. It can help you with your studies, you can read or watch a movie with its help.
There were smiles on all the faces around when Annas wish became reality. The rest of the days at the hospital will hopefully became much shorter and much more entertaining.

The happy smile on Anna’s faces tells everything. She was more than gratefulfor her beautiful brand new laptop.

We would like to thank the generous guests and the management of the Thermal Hotel Visegrád for their donations and support, that allowed us to realise Anna's dream. 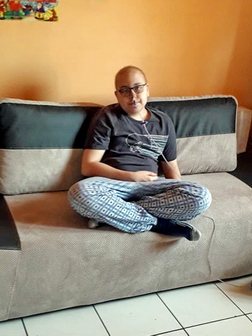 Márk’s wish was a new couch to his room. He had already seen it somewhere, so he knew exactly what kind of furniture to ask from the Magic Lamp Foundation.

It took some time to get the requested couch but Márk was extremely happy when it finally arrived. The new couch became the centerpiece of his room. 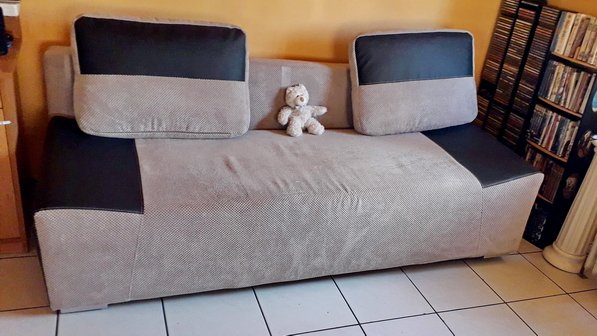 We would like to thank the generous guests of Thermal Hotel Visegrád for their support, thanks to them we could make Mark's wish come true. 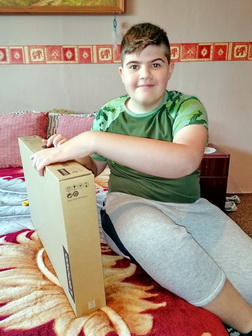 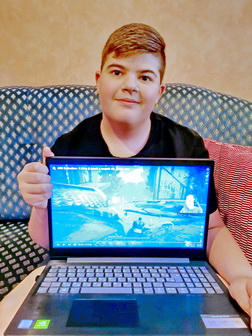 Dávid Róbert is keen on animals: he had been riding before his disease got worse and now he enjoys playing with his dog, Fortuna. He also likes reading, playing Lego and computer games.

Dávid learns diligently, his favourite subject is environmental studies and his favourite computer game is Planet Zoo. Unfortunatelly his computer was too old to run that game, so he decided to ask for a new laptop from the Magic Lamp.

We gladly fulfilled his wish and Dávid was really happy and enthusiastic when he installed his new computer. He can use it for playing and learning as well.

We would like to thank the generous guests of Thermal Hotel Visegrád for their support, thanks to them we could make Dávid’s wish come true. 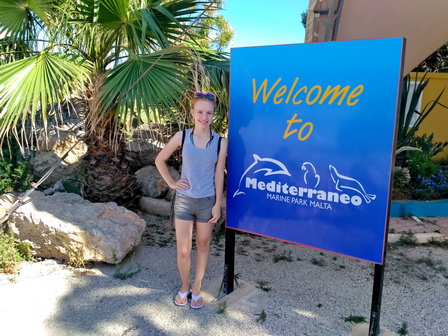 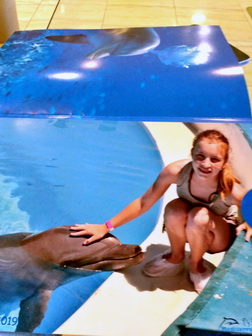 We met Rami and Gréti on June 21st at the Liszt Ferenc airport, to go to Malta and pet dolphins. The flight was already very exciting for both girls, as that was the first time they went on a plane. After landing, a minibus took us to Mellieha. That took 45 minutes, during which they saw the sea they have always dreamt of seeing. We stayed at Luna Holiday Complex and explored the beach and port, where many small sail boats and boats were waiting for passengers.

The following morning, we waited impatiently for the car to arrive, that took our little group to Park Mediterraneo, where we spent the entire day. We found each animal show fascinating and breathtaking, the first one of which started off with the feeding of a South American coati. The parrot show’s pretty and smart participants showed great success, not only for the children, but also the adults in the audience. After, the seals demonstrated their playfulness and skills. They danced to music, clapped and jumped at the sight of the audience’s joy.

After this came the most spectacular attraction, which was the main reason we came here for. The dolphins in their pool completed funny and kind challenges, which the animators rewarded with fish snacks. They left the audience with their jaws dropped with their gigantic jumps, high-pitched whistling and sense of rhythm. After the show came the moment for Gréti and Rami to finally pet the dolphins. Obviously following the hygiene rules, they sat beside the pool to touch the approaching animals. The girls’ faces were filled with joy, shown by their enormous smiles, as their lifelong dream just came true. The rest of the afternoon we just spent walking in the park and also watching the snake show. The third day was spent at the beach tanning and swimming. That afternoon was then spent on an amazing boat ride that took us into caves. We then stopped at the infamous Blue Cave for an hour of resting and swimming, after which we returned to Mellieha.

On the last day, we took a walk on the beach to say goodbye to the sea and the marvellous view. Later that day we got onto the plane, a little tired, but certainly happy from all the adventures, to return to Budapest.

Thank you for this wonderful trip, so Rami’s wish could come true! 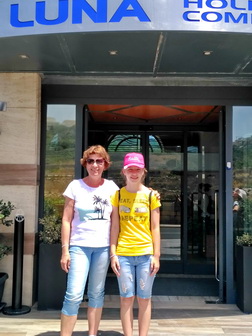 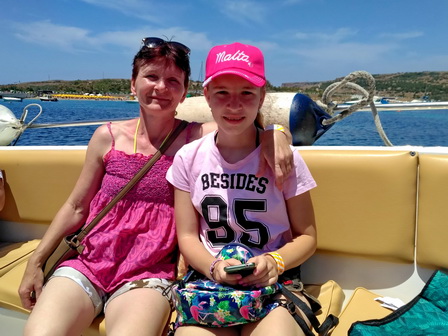 Thank you to Schneider Electric, the Ibis Styles Budapest Airport and the CHARITIES AID FOUNDATION AMERICA for their support!

We thank all our private supporters for their help!