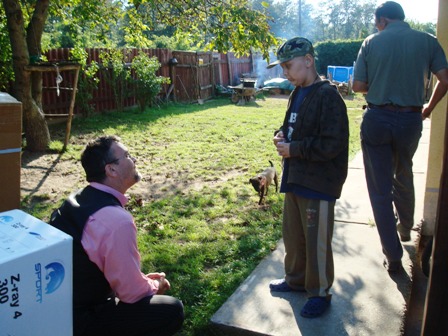 I have been a voluntary for some weeks and I hardly waited for my first present giving to an ill kid. Some days ago Misi - one of our wish- coordinators in Győr - rang me up and said there was an ill boy called Rajmund in Gönyű who would received his wished present on 22nd September.

After work we went by car to Gönyű with the present with a inflatable electric rubber boat. We met the mayor a journalist and a press photographer in front of the city hall. We got together to the 10-year-old Rajmund’s house.

Rajmund was very surprised at seeing this lot of people. We informed him why we came. Rajmund was a little bit tired of learning but he was happy when he saw the boat in the yard. When the boat was put together he became deeply touched. A lot of photos were taken. We were talking to his mother and his sister called Lolita while the journalist was making an interview with the father.

I was informed Rajmund is a private student at school and he is very clever.

We wish you dear Rajmund a lot of strength to your operation and hold on!!! Have nice time in your boat!!!

P.S.: It was a good feeling for me to give presents to somebody and I hope I often will take part in present giving in the future.


Thank you for the support of 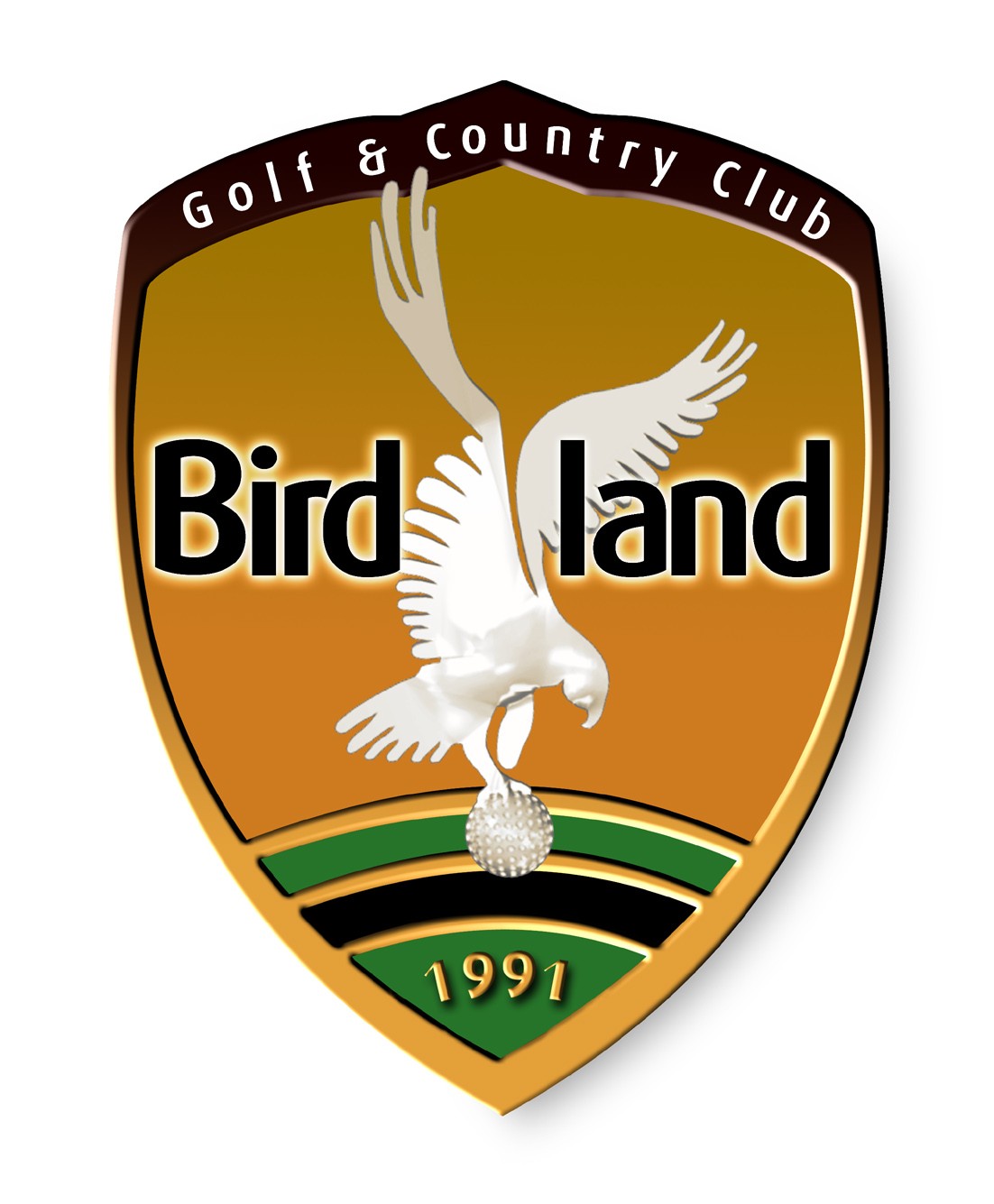 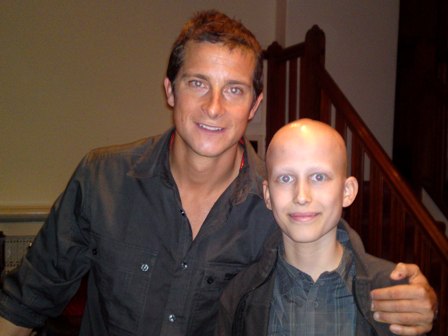 The magic lamp works, or a London dream comes true.

On a sad March day I was lying in the Tűzoltó street children’s hospital. I just had been through a brain surgery, 35 treatments of radiation therapy, and the resulting discomfort.

I was just trying to overcome my nausea, caused by chemotherapy, with the help of Dr. Garami, Dr. Hauser, and the all the nice nurses, when an older lady sat down beside my bed.
She told me about the Csodalámpa (Wonderlamp) Foundation that was brought to life by Eva Patzauer, with the purpose of granting special wishes. Wishes of children who are fighting for their recovery, and who have to undergo many unpleasant but necessary treatments. To make these wishes come true demands lots of joint effort and organization from the members of the foundation.

So it happened that I could make a wish.

I “rubbed the lamp” and was pronouncing my long-time secret wish: to meet the adventurer Bear Grylls, host of Born Survivor on the Discovery Channel.


Without my knowing a group of volunteers with the guidance of Éva started making phone calls, sending out e-mails, until one day in mid-September I found out that my dream was going to come true, and I was going to meet Bear in London.
From the plane tickets to the hotel everything was organized for us. At the airport I met Andrea Molnar, a volunteer of the the foundation, who was our escort and guide for the time we spent in London.

London was wonderful, and fascinating. But I could only think of my upcoming meeting with Bear Grylls. We had to be at the Holy Trinity Brompton Church at 7 PM on September 22nd where Bear was invited to talk about his life and his faith.
When we got there two of the organizers, Keira and Alice were waiting for us at the entrance. From that moment time sped up. We were escorted into a big tent and offered food and drinks, but I was unable to eat even a bite. Only this time it was not the chemo, but my excitement that spoiled my appetite.
A journalist arrived who asked me to tell her my story. Then I was led into the church, where pictures were taken. People started arriving and my excitement rose even higher. Then I was led into a room, where Bear was already waiting for me.

I almost started crying from happiness, but I did not come here to cry, right? He hugged me and asked me many questions. Then he gave me his signed book, a few pictures, and many more hugs.
I also gave him some presents: a bottle of walnut pálinka, a real Hungarian “survivor drink”, and a little movie on DVD that I had made for him about myself. The title of this movie “I won’t give up”, because I know that this is the only way to get better, as I had learnt it from Bear’s adventurous life.
Then we had our pictures taken, he hugged me again, and told me that my strength gives him strength as well.

At the end of our meeting he promised me that after his talk he was going to give me his shirt that had been especially made for him. He said that the only reason he could not do it right away was that he could not do his speech without his shirt!
After our meeting I watched his interview with the reverend from the first row, seated amongst Bear’s wife and friends. Afterwards he came up to me and gave me a final hug.

And he really gave me his shirt, with “Jozsef the Hero” written on its back. We said our goodbyes, and I left floating two meters above the ground.

My wish came through and this experience has given me lots of ammunitions that I can use on my road to recovery if I need something to cheer me up. I would like to thank Eva Patzauer, Andrea Molnar, all the Csodalámpa volunteers and sponsors for their help.

I have two advices for all the kids and especially for those at the Tűzoltó street Pediatric Clinic:


This wish was fulfilled by the support of the following companies: 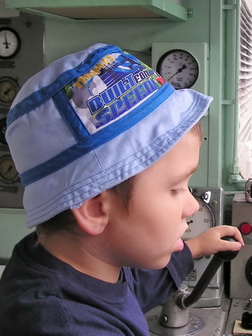 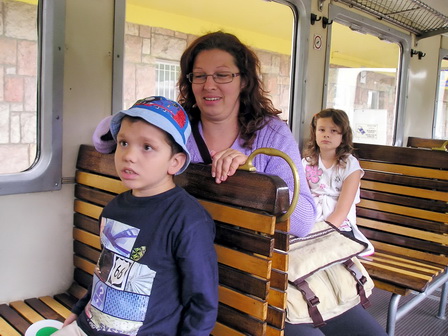 Thomas is one of Kristóf’s favourite toys, so it gave him much pleasure to see real engines at the traction site of the Children’s Railway.

We were received by the head of the railway who was very patient and helpful. He told us lots of interesting stories from the history of railway engines and cars and about their maintenance. However, Kristóf was rather interested in the scenery and driving the engine. He also received some gifts; a flag, a calendar, etc., all that would remind him of railway and of this particular day.

Next we boarded a train with children in charge of many tasks and rode to the János Mountain. We had a walk there and switched to the Chairlift that was also quite something for Kristóf and he enjoyed it indeed. After some walk and riding the train again we returned to our start and I called the day by handing over to Kristóf his other, transport-related toy favourite: a Duplo set or Cars.

He squeezed them tight and was filled with joy as they took off home after this day that gave him so much pleasure.

We would like to thank to Mr Tibor Kollár and the staff of the Children’s Railway for their help.

Without them, Kristóf’s dream would not have come true. 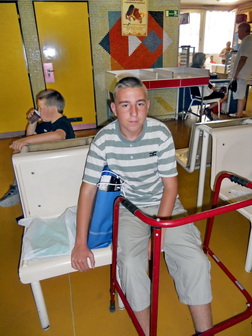 I met with David and his family at the Heim Pál children’s hospital.

He is a happy, nice boy despite the fact that due to his serious illness he is in a wheelchair. Dani spends a lot of his time in bed so from the Wonderlamp Foundation he asked for a laptop, so he can keep contact with his friends and the outer world.

Of course the Foundation happily fulfilled the request, and we were glad to have helped by doing the thing we love the most: giving.

The laptop is a donation of

. Sincere thanks, in the name of David too.