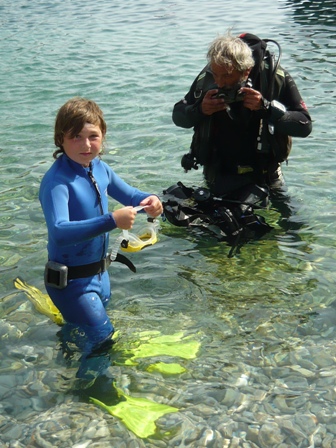 Ricsi’s dream was to diving in the sea and he wanted to know what kind of life is under the water.
Sára found his wish, and she decided to make his dream true with her family in July 2011.

Sára and her father are waited for us in Senj’s village and helped us to find the accommodation. Later we met with them in the diver base again. After we arrived to the accommodation, we immediately took out the swimming dresses and we went to the sea. Everybody loved the small beautiful bay and Ricsi, who was first time at the sea, tasted the salty water with his wicked eyes.

Next day was the diving. Sára was a great help with the clothing who is one of the crew, and Ricsi’s new friend.

During the diving they often talked together, and swam in the sea. They got every support about the rules for underwater, gear and other useful information about the diving, and then they went back to the adventure. Ricsi and he’s parents were with a small fear and big excitement, and they viewed the event from the beach. They relieved when they saw their child again a half an hour later.

We were listening Ricsi’s enthusiastic story about his experience under the water and his blue eyes were sparkled. The next day they were diving again but they had some technical problems but the experience was unforgettable.

and thank you for gave to Ricsi an unforgettable experience.

Thank you for the support of 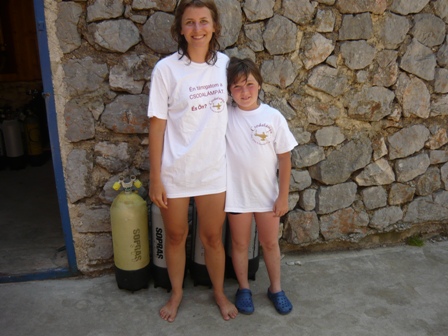 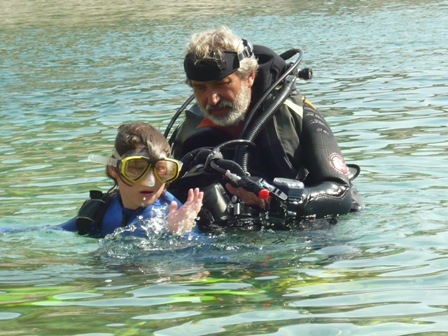 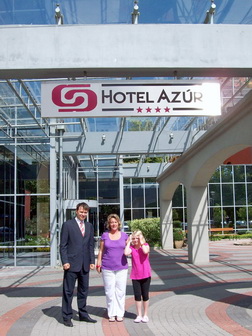 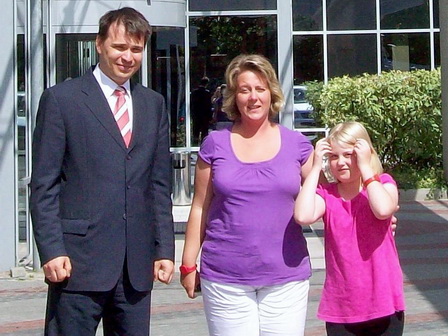 Olívia with her mother and Mr. Balázs Sternóczky, sales and marketing director of Hotel Azúr

Olívia came to the Csodalámpa Foundation with a specific wish: she wanted to have a holiday with her mother at the largest wellness and conference hotel in the Balaton region, the 4-star Hotel Azúr in Siófok.

Her mother Szilvia told me that Olívia spends a lot of her time browsing on the Internet. She had specific criteria in the search for the ideal hotel. She decided for Hotel Azúr because she wanted to make sure they wouldn’t be bored even if the weather wasn’t nice. Hotel Azúr offers lots of fun even for rainy days with its water slides, spa and sauna, various recreational and sports facilities and kids’ programmes.

Olívia is one of the top students in her class and she likes sport and exercise a lot. To fight her illness she needs to exercise regularly. She tried out the Hotel’s gym and the mini disco but what she liked most was the wellness centre. She is a good swimmer - she started taking swimming lessons when she was in nursery - so she didn’t mind the slightly cooler water of the outdoor pool at all - she swam in it every day.

Olívia praised the Hotel’s cuisine and their comfortable room, and despite the presence of two of the hotel’s staff, she even admitted trying out bouncing on the bed. "It was really bouncy", she said, with a mischievous smile.

I am very happy to have met Olívia, who is a charming and kind girl, blessed with a wonderfully good sense of humour and self irony, which one doesn’t often find in children this young.

Dear Olívia, I hope you stay as cheerful and open as you are now and that you will get well soon!

and thanks to the Csodalámpa Foundation for helping fulfil Olívia's dream.

Thank you for the support of 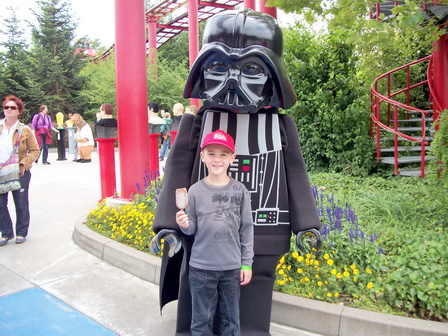 We were very excited and looking forward to visiting Legoland, since none of us had been there before. Balázs fought his illness like a hero and so at last his dream came true. Balázs’s mother Anikó accompanied him of course.

We set off on July the 21st at 8 o’clock from the parking of IKEA on Őrs vezér square, and planned to arrive to Günzburg at 4 o’clock that day, where the hotel Arcadia awaited us.

When – a few hours and a good 550 kms later - we crossed the Austrian-German border I could feel the tension growing in the car since Günzburg by then was only two hours away. We arrived at the hotel and after unpacking we took a short tour around the city discovering all the sites. We went to bed soon, because the following morning we planned to arrive to Legoland for opening.

When we got out of the car and Balázs saw the huge LEGOLAND Deutschland sign he was very happy. His dream finally became true!

Entering Legoland we were speechless: where to go first? And what to do? Anywhere we looked there were new and new attractions.
It was hard to decide who was more excited: Balázs or the grown-ups?
Then we took the roller coaster. What looks steep from under looks even steeper from the top. Although it was a bit stomach-turning it was a lot of fun, but even funnier were the pictures, that the secret built-in camera made.

After that we went through many games, exhibitions and we even built LEGOs, and yes, it is true what the sign says: „Ein Tag ist nicht genug” meaning, one day is not enough.
By the end of the first day every single drop of our energy ran out, so falling asleep wasn’t a problem.

We started the next day with renewed energy, and couldn’t wait for another adventure. This day we went through all the games again and also tried the pirate ship, and all the different "machines".

I was very happy to see how much Balázs enjoyed the park, and to see another child’s wish come true.

We are also very grateful for Balázs, that we could live through this „adventure” with him, we were all very touched by the 4 days we spent together.

Get well the soonest, Balázs!


This wish-granting has been sponsored by

Thank you in the name of Balázs too for your assistance.

Réka’s wish fulfillment was the 1527th and probably one of the most exciting: she dreamed to „meet and greet” her most favorite actor Mr. JOHNNY DEPP.

When we received her request, we were "just a little bit” frightened, whether we can do it at all (and how?!?). To cut it short it took us more than a year and lots of work of many kind persons to organise everything.

At last - thanks to her doctors and our sponsors - we could fly with Réka and her mum to London.
The last medical checks of Réka were not too promising, so her doctors were a bit uncertain, but they gave the green light in the end with one condition: the following day of her flight home she should have new and serious tests at the hospital.

We arrived in rainy weather but so we landed under a rainbow: a beautiful greeting from England to Réka, ending her first ever flight splendidly.

Thanks to the management of Art’Otel Budapest, the Hungarian member of the Park Plaza Chain we could stay at one of the most beautiful hotels, Park Plaza Westminster Bridge Hotel in the heart of the city. Somehow the staff learnt who Réka was and they were even kinder to her.


We first toured the city of course for hours for Réka's pleasure.
Then the following day Réka met Mr. Depp at the Pinewood Studios. Mr. Depp was very kind and talked to Réka several times during his busy day.

In order to publish a more detailed report and photos from the meeting we have asked and are waiting for the permisson of Mr. Depp and his management.

In the name of Réka we would like to thank Mr. Johhny Depp, for having realised this very special, thought impossible wish of a 16 years old Hungarian girl. We are greatful to Mssrs. Andy G. Vajna and Péter Rudolf for their kind assistance, for all the British, American and Hungarian colleagues, especially for Sarah, Victoria, Nicky, Nathan, Mr. Zanuck and Ágnes for organising so many things for Réka.
Many thanks for the sponsorship of Art’Otel Budapest and Park Plaza Westminster Bridge, where the management and staff did everything to make our stay most pleasant.
Last but not least many thanks for MALÉV and their frequent flyer Duna Club members who donated their bonus points for Csodalámpa, making this „kind of magic” happen. 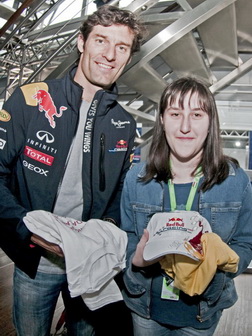 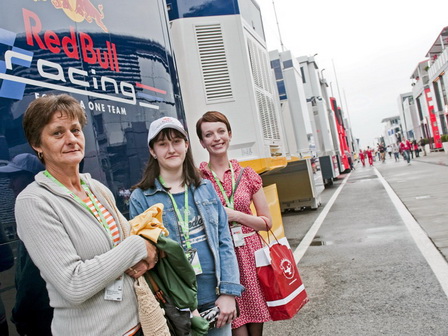 There were a lot of ill kids this year who wanted the visit the Formula 1 car racing but Noémi was the only whose condition allowed her to go there. Her wish was from the Wonder Lamp to go there and meet a famous pilot. As always we asked the Hungaroring Sport Zrt. to help us. We have got super good seats from them in a short time.

The visiting of the box street was the previous day so Noémi and her family spent two days in Budapest in the Art'Otel Hotel where they got a reduced room. After arriving at the hotel they had to go to the Hungaroring within a short time.

Thank to the Red Bull Team Noémi had the opportunity to go to the box street and to meet Mr Mark Webber, Mr Schumacher and Mr Alonso. She was in floodlight a lot of photos have been taken about her and the pilots. This could be seen on TV, as well.

The really car racing was on the following day, which Noémi enjoyed very much although it was very noisy. She was very proud to meet these famous people personally.

We thank for the tickets to Mr Gyulay Zsolt who is the chairman of Hungaroring Zrt.

Thanks for the excellent accommodation to Ms Manuela Pellegrini who is the director of Art'Otel Budapest HR.

Thanks to Ms Nagy Bernadett and her colleagues, in order to organise the visiting of the box street and the meeting of the pilots.