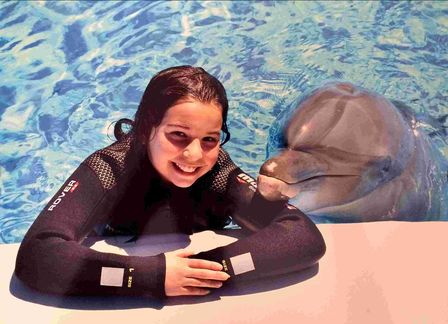 Alexa had a dream of swimming with dolphins. She was excited about the fabulous trip to Malta where her wish would be fulfilled.
This was the first time for the girl to be on an airplane and the flight attendants made her flight really unforgettable. She had even an opportunity to meet the pilot and visit the cockpit.

We arrived to Malta and the amazing moments went on. From the airport, we were taken to the elegant Corinthia Hotel, where the hotel staff gave Alexa a warm welcome and she immediately became a VIP guest. The spacious room with the terrace overlooking the sea, the swimming pools under the palm trees, the delicious breakfast and the attention and kindness of the staff charmed the little girl, who felt like a real princess during those few days. Sightseeing tours were organised by the hotel to make her stay more enjoyable.

Finally, it was time for taking part in the the long-awaited program in the Marine Park.
Certainly, the sea lion show, the parrot show and the dolphin presentation all were very interesting, but the highlight of the day definitely was the Dolphin Interaction Program: Alexa got a special swimsuit, then a short training was held about how to communicate with the dolphins. A few minutes later she entered the seawater-filled pool, where she could joyfully and happily swim with her favourite animal, the dolphin.


Alexa’s dream came true and I am sure, this weekend will remain a life-long memory!

We would like to thank for the kind support of the management and employees of Hotel Corinthia St George's Bay , Mr. Jonathan Pace, director of Corinthia Budapest, the Wizz Air Hungary Ltd, the Bástya Millenium Zrt., and our private supporters, among them Tibor to realise Alexa's wish. 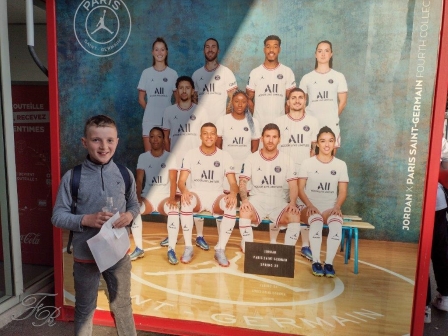 There are lots of excited traveling people, but there is a big boy out of everyone who is much more excited about flying than anyone else.
Jankó, 11 years old, had the dream of seeing his favorite team - including famous football players like Messi, Neymar or Mbappé - play football.

The Magic Lamp flew him to Paris to watch one of the matches of the Paris Saint-Germain team in its own stadium.
Even flying was a new and fantastic experience for him. He was escorted to the plane as a VIP guest, where he had the chance to visit the cockpit and to talk to the captain.

He was truly impressed by Paris itself and together with his father they visited every sight they could. And on the long-awaited day, he saw several of the world’s greatest football players in real life.


He was indescribable happy. He said,
“I would have never dreamed of making it to Paris, let alone sit in the stadium of the best team in the world, and watch them play while they were celebrated with a standing ovation by the fans. Thank you so much for the many experiences, smiles, kindness and last but not least the LOVE.”

We truly thank our supporters, the Wizz Air Hungary Ltd, the Marriott Budapest Hotel, the Hesse Trade Kft. and our private sponsors for being able to bring together such great joy to Janko and make his dream come true! 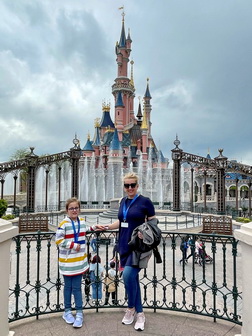 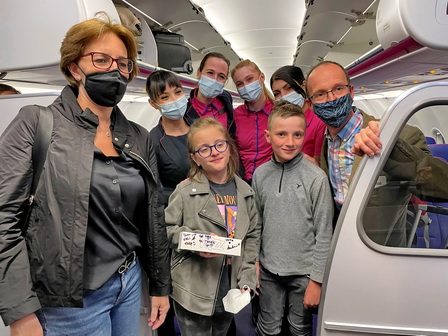 An old dream came true for Flóra on a weekend in May: she went to Disneyland, Paris.

Because of the closures, travel restrictions she could only day-dream about this trip for a long time but her enthusiasm didn’t shrink at all.

Despite the late night arrival she was exploring Disneyland from early morning till late night, immersing in its wonders. She really felt special as she did not have to wait in line ever, she was entitled to jump the queues and she could watch the parades, the evening fireworks from the best spot.

This was enhanced even more by the kindness of Wizzair: she was greeted with special attention on board, she could even explore the cockpit with the captain.

This weekend will remain a life-long memory for sure!


Many thanks goes for their kind support to the Euro Disney Associes S.C.A., the Wizz Air Hungary Ltd., the MVM Energetikai Zrt. and our private sponsors, that helped us fulfill Flóra’s wish. 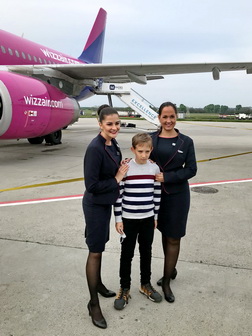 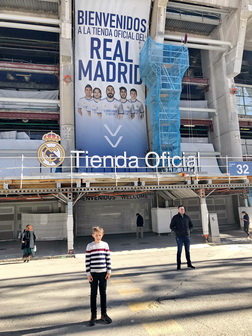 Football means everything to Benedek!

He plays in a team, regularly watches the matches, especially those of the Hungarian league, and knows everything about football. He would easily tell you the exact line-up of a large number of football teams worldwide, by heart. His dream was to attend a major international game, and he has managed to see no less than one of the most prestigious matches in the world, between Atlético Madrid and Real Madrid, in Madrid of course.

Even the travel to Madrid was exciting because this was the first time for Benedek to be on an airplane. Colleagues from Wizzair have done everything possible to make his flight unforgettable. He has received VIP treatment, he could learn about the aircraft and meet the pilot. Before the big game, he had some time to see the main sights in Madrid. He has enthusiastically strolled on the streets of Madrid’s downtown and could not possibly miss the famous Bernabeu stadium, the home of Real Madrid.

Of course, the most important experience was the match itself where the fans have created an incredible atmosphere and Benedek could see some of the world’s best players in real life!


We would like sincerely thank the help of Wizz Air Hungary Ltd, Henkel Magyarország Kft., Schneider Electric and also that of our private supporters, among them Tamás and his friends that made us possible to realise Benedek's dream. 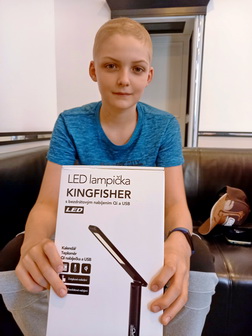 Benedict enjoys playing soccer and cycling outdoors, but when he is forced to be indoors, he loves playing with Lego’s.

He is interested in architecture and is doing well in math, so he wants to work as an architect or economic engineer in the future.

In his newly renovated room, he wished for a gamer chair and an LED lamp on his desk. The foundation was happy to fulfil his wishes.

We hope that with this furniture, Benedict’s “empire” has become more comfortable.

Thank you for the support of Henkel Magyarország Kft., in fulfilling Benedek’s wish. 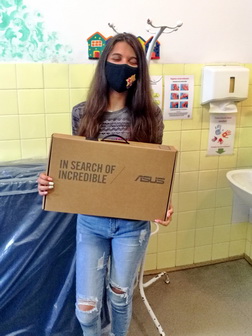 Here is a happy teenager whose wish has come true.

Csenge, a 9th grader, wished for a laptop to continue her studies, as she has to do a lot of homework online in the secondary school.

Csenge, enjoy your studies and use your laptop with health and joy!

Many thank for the support of CHARITIES AID FOUNDATION OF AMERICA! 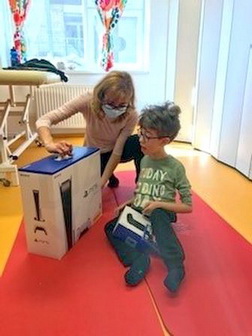 Áron asked for a PlayStation console with games and two controllers in order to play together with his brother.

The little boy arrived for a medical check-up, but this time he had a big surprise. He was delighted to receive his gift and couldn't wait to get home and start to play battle games.

We would like to thank Henkel Magyarország Kft. for fulfilling Áron's wish. 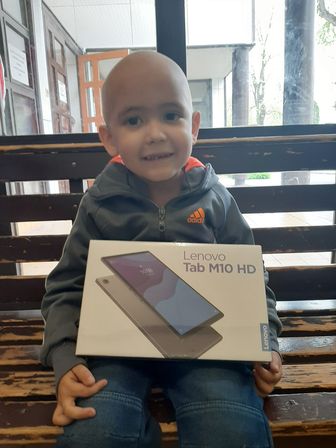 Krisztofer asked for a tablet from the Magic Lamp Foundation. Since he spends so much time in the hospital, his favourite pastime is watching fairy tales. He would watch Paw Patrol, Peppa Pig and Puffy the Pooh stories almost all day.
Lately he's been watching them on a borrowed mobile phone. Krisztofer said he would be glad to get a bigger screen to enjoy the stories.

His wish was soon granted and the little boy received the much-awaited tablet.

He would prefer to sleep with his new gift – told us his father.

We wish you many happy hours watching fairy tales and a speedy recovery!

We would like to thank the management and the staff of Budapest Marriott Hotel for making Krisztofer’s wish come true!