Levente - as the other kids in his age – is keen on „top” telephones, so his wish was a HTC One mini mobile phone.

We managed to organize a meeting on 27th March, when Levente and his parents went to a medical examination to the II. Pediatric Clinic in Tűzoltó Street. 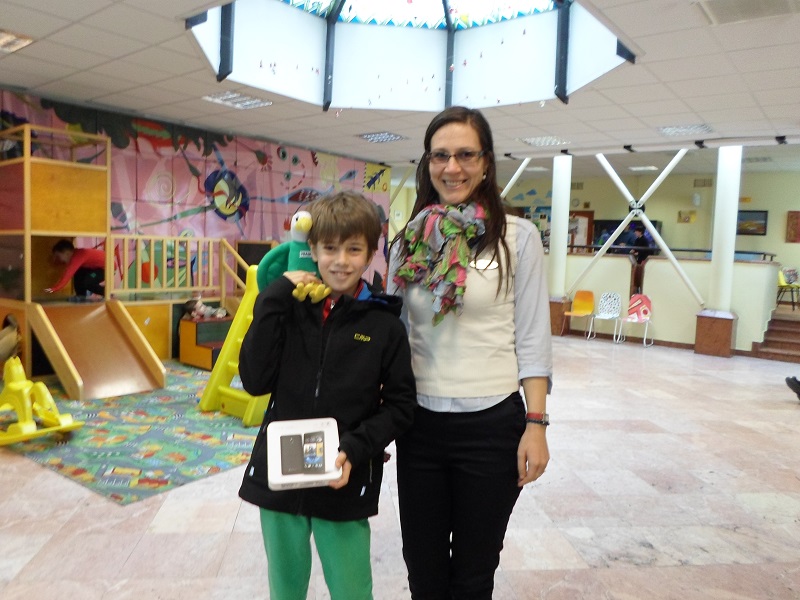 Many thanks for the help of Firstmed-FMC Kft. 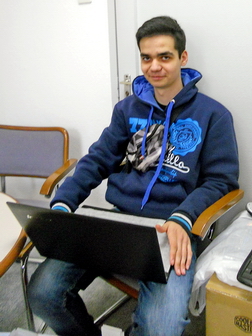 Feri – as many other kids in his age – is keen on computers.

Since he spends a long time in hospital due to his illness, he asked for a portable computer.
His choice was a serious looking, black Lenovo laptop.

He got the gift in the office of Magic Lamp Foundation, where Feri arrived with his mother.

He was a little bit shy standing in front of the camera but finally we managed to take a photo where he smiles... 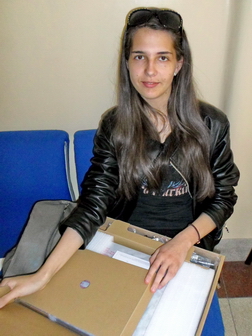 Réka is seriously ill, she has to spend extended periods in hospital. No wonder she was longing to own a laptop. She was waiting for her treatment in the corridor of the hospital together with her Dad when we (Andi, Reni and myself) showed up with a box in our hands.

She was truly surprised to see us there, and was all smiles when she received from us Magic Lamp's gift. She said she would use the laptop for her studies, but of course she would also peek into her Facebook page time and again... 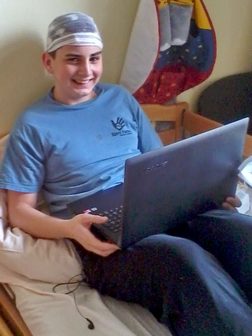 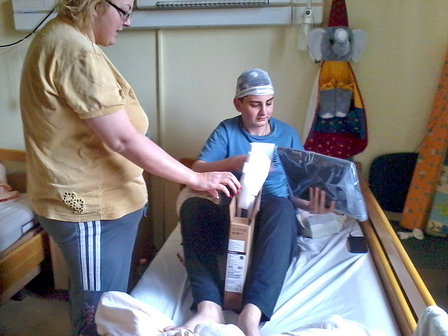 Norbert lives in Nagyatád with his parents. He goes to high school in Csurgó, and is a very good student. This kind, friendly and good-humoured boy is determined to become a veterinarian.

He has been struggling with his illness for two years now, and is about to undergo a risky operation. Our initial aim was to invite Norbert to a conference organised by the Professional Women's Association (PWA), where we could have made his dream come true together with all our supporters and donors. However, this was not possible because he was already being prepared for his surgery. Accordingly, we handed over the laptop at the hospital with the help of our volunteer, Vera Doczy.

We wish to express our thanks to the organisers and participants in the PWA - British Chamber of Commerce in Hungary (BCCH) conference, held on 26 March at Corinthia Hotel Budapest, for their generous donations, which made all this possible.

Gordon’s dream was a bit out of the ordinary, and it took quite a few of us to make it come true…

Early one morning two cameramen and a lady holding a microphone knocked on the door of his family’s home in Kecskemet. Gordon had no idea of what was happening, but it already promised to be good clean fun.

And it got even better: he was driven all the way to the 7th District Police Station in Budapest, where a bunch of uniformed officers showed him around the parking lot stocked with police cars and bikes, and they even pulled out handcuffs while brandishing their batons. All of this was for show, of course…

The real ‘wow’ moment came when the district police chief and his officers lined up to give Gordon a whole pile of presents: a tailor-made police T-shirt, a police cap with a badge, a children’s storybook signed by all the officers on duty that day and a huge LEGO set.

At that point, Gordon was ready to call it a day, since all he wanted was to put all his gifts to good use.


But then he was ushered into a police car with its lights flashing, and surrounded by a motorcade with sirens blaring he was driven to Madách square in downtown Budapest. A large group of onlookers – passers-by, bikers, grannies pushing prams – cheered as the chief of the Police of the Hungarian capital gave Gordon the title of honorary police officer.

No matter the gifts, the crowds, the cold and the biting winds – the little boy was over the moon when he could finally mount the battery powered police bike presented to him by Magic Lamp.

Words cannot describe Gordon’s joy and happiness… Up until the very last moment he was not aware that the whole day was dedicated to him and that all those kind and smiling people around him had one single goal: to make his dream come true.

Needless to say, that day will remain memorable for all the participants, because they share the belief that happiness heals.

We would like to express our heartfelt thanks to Lieutenant-Colonel Dr Szabolcs Kiss, chief of Budapest’s 7th District Police Department, Police Constable First Lieutenant Ferenc Szilágyi and all their fellow officers for organising the day’s events and for the time and effort they put into Gordon’s gifts.
We also owe thanks to Police Brigadier General Gábor Bucsek, chief of Budapest Police and his colleagues, and to the Budapest Mayor’s Office for granting the permits required to hold the event on city property. We are grateful to Bálint Bíró, who assembled the battery powered police bike, and to all those at Budapest Taxi Company who volunteered to drive Gordon and his mother back to their home in Kecskemet. Last but not least, we would like to thank all those kind passers-by whose cheers, applause and smiles made the day truly memorable for Gordon.
In short, a big thank you to all those who helped us make the life of a sick child a little brighter. 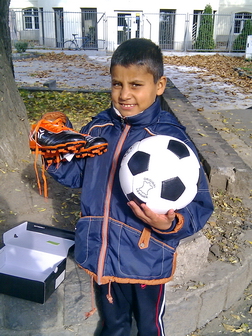 Lacika was accompanied to the medical checks in Budapest by his grandfather. I was waiting for them till the medical examinations were over, then we left for a nearby sports store to buy the long awaited soccer shoes for Lacika.

After some searching and asking for assistance we found the right shoes that were comfortable and Lacika liked them. A leather soccer ball was also chosen by the boy in order to use the new shoes, "to have something to kick"!
He checked competently and professionally whether it was hard enough and well bouncing.

Laci was very glad to hold the package in his hands, which included his both wishes.
He thanked the gift repeatedly, and his shining eyes showed his happiness. When the photo was taken, he also took his new soccer shoes and the ball enthusiastically in his hands.

Many thanks for the support of the management and colleagues of Hollis Wealth from Canada!