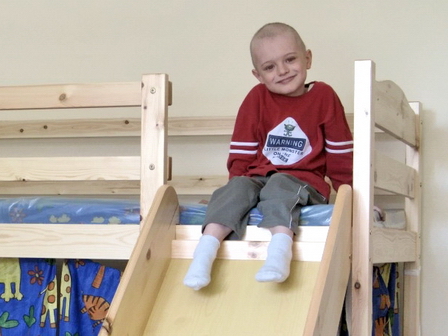 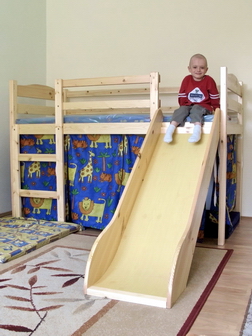 A big day at the Haematology Dept. at the Pediatric Clinic in Miskolc...

Four wishes has been granted on that single day by Wonderlamp!
Tóbiás (Toby) and Viktor got PC-s, Józsi (Joseph) a PSP, Petike (Peter) a large big bed with a built in slide. Plus the latter boy had this birthday on that day.

It was a big surprise for all of them, as we kept all the preparations secret.

Toby was told, that he should come to the Clinic for some medical checking.

Viktor has already given up almost all hope, that he ever will be the owner of a PC...

Józsi waited so much... he hoped that maybe today will his wish fulfilled by Wonderlamp.

Petike (Peter) would not believe that on his birthday, he can sleep in his new "highrise" bed and use the slide, that came with it.

We all wish you lots of happiness and a físt recovery when using the presents!

We would like to thank the teachers and pupils of theAmerican International School of Budapest, that they supported the granting of the special wish of Peter!

We would like to express our sincere thanks to the Foundation and to the supporters the wonderful present, that my son strated to use with unimaginable joy. He was climbing up and sliding down the whole day and even the small cubicle is already full with his thing.