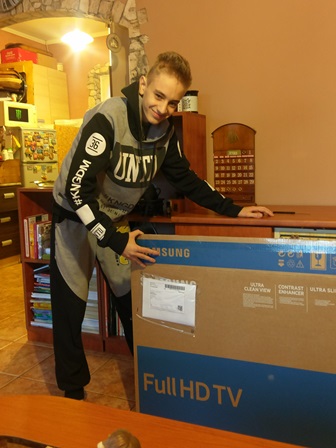 Martin lives in Lajosmizse with his mom and his sister. He wanted a big-screen smart TV, to watch movies and series, and to play computer games on the big screen.

The TV was delivered a week before Christmas, but we could not visit the family before the 23rd. (until that day, only in December, Magic Lamp's nationwide wish-granting network has fulfilled 35 different wishes of life threatheningly ill children...)

Martin had a difficult week, looking at the big box, and dying to open it to see what was inside...
So he was very happy and excited when we finally arrived to officially present it to him.
He had already watched some videos on youtube, so he expertly opened the box and proceeded to set up the TV.
It was placed in the family room so the whole family can sit down and watch programs together.

We wish all the best to Martin and hope that he and his family will enjoy their wonderful new TV. We would like to say a big thank you for the beautiful gingerbread house that Martin’s mom made for us.

We would like to thank in the name of Martin too for the support given by our private donors, Mr Richard Jacobs and his friends. 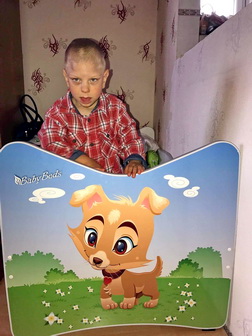 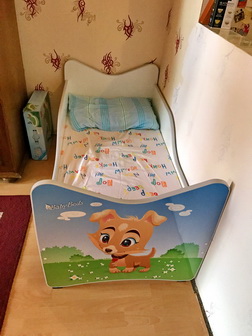 On the 3rd of December was the day when me and my family picked up our electric screwdrivers and went to a really nice family to fulfill a - for me very important - little girl’s wish...

The two dads were building the bed, the moms were cooking and the kids were playing.
Dius (nickname of Diana) was really happy about her new bed and all day long she was telling us how excited she is about the evening when she will at last sleep in it.
The dads worked fast, the bed was ready by the afternoon and Dia was looking at it with glittering eyes.

She has already invited Hanna – my younger doughter – for a pyjama party.
We would like to thank that another wish could have been fulfilled.

We would like to say a special thank in the name of Diana too to the leaders and members of XpatLoop, the largest Hungarian expat community, for organizing the Budapest Bonfire Night Party for Charity and for the donations raised at the event. 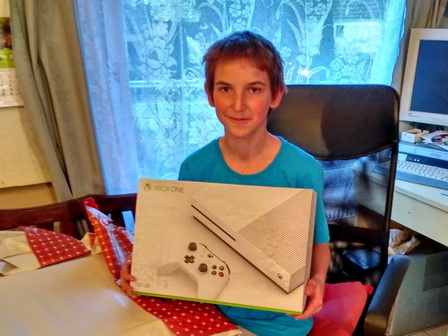 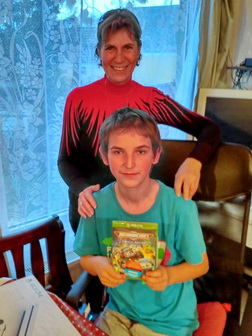 It was a well kept secret for Bence that his wish is about to be fulfilled - his mother only told him that she invited some new friends...

As we arrived with the big box and the new XBOX inside he was at first quite surprised but then soon got really excited. After the "official" handover he told us how deep he was touched by the big surprise...

When not in home, Bence lives in a dorm and despite his severe illness he leads a fully balanced and independent life as a teenage boy. Thanks to his excellent academic achievements he gets a scholarship too. 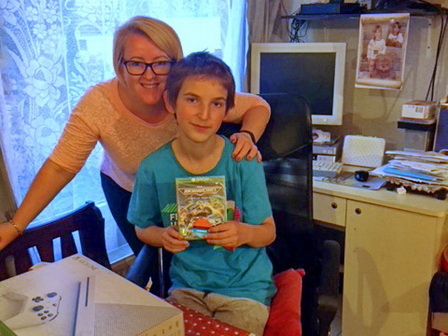 We would like to thank in Bence's name too the support of Firstmed-FMC Kft..

Alexandra has been taking singing lessons since she was a little girl and she performed at school and city events with her high school musical team.
After having recovered from a serious surgery she told us her secret wish: she would like to perform with famous singers on stage.
We have learnt about her wish about the time when we started planning the foundation’s first charity event with 300 guests to be invited so we thought this would be a great opportunity for Alexandra to go on stage and sing. She said she would be happy to perform to our guests – and accepted to be one of the „surprises” of the event.

Our only problem was that Alexandra lives quite far from the famous singers she was going to sing with. It was quite a challenge for her as she had to study for school exams, so she couldn’t travel a lot.
She learned the songs from the Internet and communicated on-line with the other – professional, to say the least - singers.
The special day came finally when Alexandra arrived to the beautiful Hilton Budapest Hotel from Hajdúszoboszló. After a quick sightseeing at the Buda Castle she could finally meet the singers to practice a little together before the big performance. There was not much time for that but Alexandra fared well.
In the crowded ballroom 300 people were waiting for the surprise.
The evening started with a few short speaches then Zoran Stevanovity and his band sung a few songs. After the mini-concert, Zorán invited Alexandra on the stage to sing with them. Their vocal sounded fantastic while singing Zorán’s hit „Mi kéne még”. The crowd was clapping and cheering… Then Alexandra performed another song alone.


Later in the evening she could sing another duet with Kata Csondor and the Soul Family. People really loved her performances.
This was a most touching wish fulfilment for everyone present, as our supporters could see the moment of a „Magic lamp” wish coming true.
Alexandra could not stay to the end of the charity event as she had a medical test scheduled for next morning at the Bókai street pediatic clinic.
We hope that this night gives her strength to recover fully as soon as possible.

We would like to thank the 300 guest who were with us on our fundraising event which took part at the Hilton Budapest Hotel. With the guest’s support we could fulfill Alexandra’s dream and next year we shall fulfil many other children’s wish.

We would like to thank Zorán and his musician friends, Csondor Kata and the Soul Family and of course the Hilton Budapest Hotel for helping us to grant Alexandra’s special wish.

300 people fulfilled Bianka’s wish when we invited the little girl and her family to our fundraising event.
Despite her young age, Bianka was not shy at all in front of these many people. She walked to the stage with confidence.

Her mother told us that in the last 2 years Bianka spent most of her time in the hospital or in her room because of the medical treatments. She really likes building things and her favourite toy she plays with is LEGO. That is why she asked for the LEGO medical hospital series from the Magic Lamp Foundation.

When we told them we will hand over Bianka’s present at the event we asked her mother to be with her daughter on the stage. But Bianka told us she is a big girl so she can handle this by herself. When her name was said at the event, she was right there on the stage immediately. She had a big smile on her face when she got the two big boxes and she also greeted her supporters with a big smile.


She unpacked the LEGO-s at their table and she already started in her head to build it...
As she was not afraid of the crowd, we asked Bianka’s help at the raffle.

This was a big and long day for the little girl but we hope the love she got this day will help her heal fully as soon as possible.

We would like to thank the 300 guest who were with us on our fundraising event which took part at the Hilton Budapest . With the guest’s support we could fulfill Bianka’s dream and next year we are planning on fulfilling many other children’s wish. 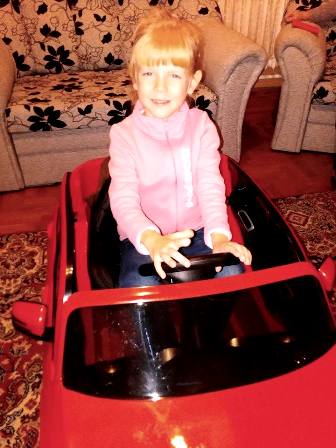 On a nice autumn afternoon I arrived to the 5 years old little Vanda’s home.

She was surprised and excited because she didn’t know who I was and why I was there.

After a little talk we became friends easily. After the chit-chat the time has come to give her the surprise which was a fire red Mercedes electric car. When Vanda saw it her eyes were shining from the excitement. Her wish came true!
First, she walked around to get a closer look and then she got into her new car and didn’t want to get out of it...

I wish her all the best and a fantastic driving experience in her new car! 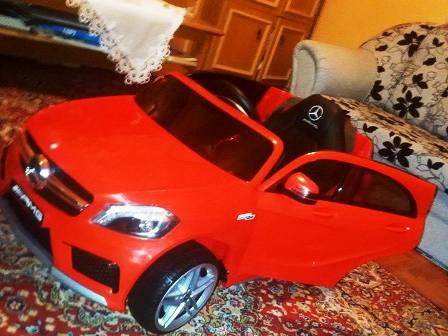 We would like to thank the students, their parents and teachers of the American International School of Budapest for their decade long support!