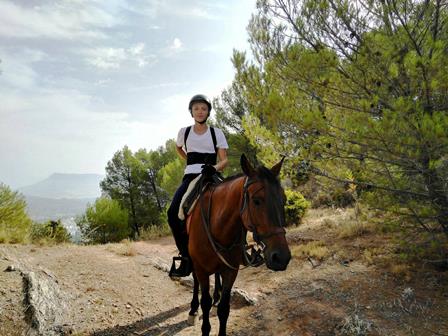 Ádám’s favourite free time activity is riding a horse. He learned it years ago. Despite his age, this hobby led him to Bud Spencer és Terence Hill movies especially the parts where they ride their horses but he likes the fighting scenes too.

After thinking it through, he asked the Magic Lamp Foundation to take him to the places where his favourite movie characters rode their beloved horses. He even gave us some hint about the shooting locations. Most of them was taken in South-Spain.

Our dear voluntary and supporter, Mónika lives in Madrid for a while now and she is a tour gide there so the opportunity was given where should we go for help.
We managed to find the right locations near Madrid, there were big mountaines and nice beaches around, everything that Ádám asked for.

His first time riding a horse there was a really big joy for him, they were in the mountaines for hours. Ádám was with a local teacher, who was amazed by the boy’s knowledge so he even led him to gallop. The trip began in the morning and they went through amazing landscapes. Ádám was a bit tired when they got back in the afternoon, but the dinner at the Hotel made his mood again.

Next day it was time for the beach to try out on horses. Here, Anthony helped him through. This time we wanted to create the perfect movie scene: riding a horse on the beach in sunset. So he only set on a horse in the late afternoon, and they came back at night. Ádám told us, his horse went into the sea and it was a fantastic experience to see the sunset from the water. Of course we packaged his dinner for him because we knew how much he loves the Spanish food.

At the end of our journey I asked him, what was his favourite part. He gave me two quick answers: Riding a horse in the mountains and the Hotel. He said he has never eaten this much. We laughed together and I didn’t even know who enjoyed this trip more. It was fantastic to see him this happy and he was like a different person. We hope this trip will help him to recoverand be stronger.

Ádám wrote us a really nice letter to thank us:
Best wishes, Ádám

We would like to thank in the name of Adam too the support given by the Hungarian National Bank, the E-ON Hungaria Group and our private donors, that made it possible to realise Adam's fantastic dream. We also thank Mónika and Juan for their kind support in Torremolinos. 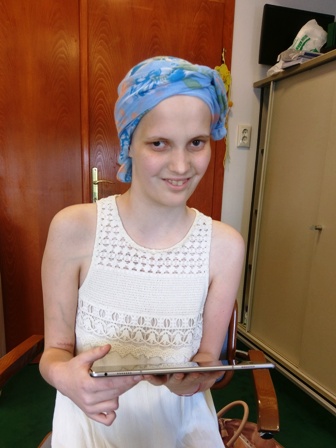 Virág asked for a large screen tablet from Magic Lamp Foundation as she uses internet on a daily basis just like every teen.

Virág and her mom visited us at our office, so there we could fulfill her wish and gave her the tablet. She carefully unpacked it, and we instantly saw the curiosity on her face, thinking about which movie will she watch first on the new tablet.

Dear Virág, we hope this special gift will give you lots of joy.

We would like to thank Mellow Mood Hotels and our private supporters for helping Virág’s dream come true. 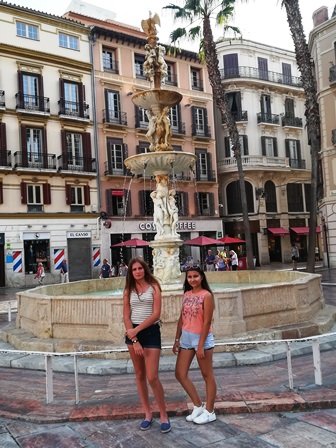 Anna (left) had dreamed to see the sea...

She likes the biology that is why besides the view of the sea she is interested in the seelife too.
When I have called her with the great news that we are planning to travel to South-Spain with other children, especially Alexandra and Adam, her fellow-patients, she said yes immediately to my question whether she could join us.

The children were very excited when we met at the airport, unfortunately our plane had 4 hours delay because of the bad weather.
So we have arrived to the hotel very late night and we had no chance to see the sea. The following morning Anna was very happy when she saw the fantastic blue sea from their balcony. She was all smiles at the breakfast and kept smiling during the whole trip.

As a sea fan, she collected sea shells (starting early morning), swimmed a lot and was delighted to visit the Sealife Aquarium in Torremolinos. Torremolinos is a wonderful small town with long beach where you can walk for hours. In the botanic gardens there are amazing flowers and trees and what is more important for a "future biology teacher", near to this town there is a real crocodile farm.
I have to tell you that we were very happy to see that there are stone railings between the crocos and us, but we were near enough to watch them very accurately. They looked quite unfriendly and we were very surprised to hear from the animal careers that the crocodiles like very much to lie in the sunshine for hours with opened mouth. Maybe it is true but I rather thought that seeing our smiling, pretty and happy small group they were thinking about the dinner...

Anna like Alexandra also was interested in the Spanish culture, so we have visited Ronda, a beautiful medieval city. With our local volunteer we visited the city, the old amphitheatre with a bull sculpture. We were walking a lot in the beautiful gardens. We felt we are lost in the flower sea.

Anna was never tired, she made lot of pictures and went down 300 stairs with me to admire Guadiaro, the river of the ancient city, running in a deep canyon. We could not really imagine how the water bearers were able to go down and up several times a day to bring water to the royal family and to the other citizens.


As I could see, Anna has got lot of power from this trip. After our return I called her mom Kati and she told me that this adventure and the experiences reinforced Anna's previous intention to become a biology teacher.
When Anna told to her daddy about this amazing trip she added that now she is preparing very hard for the maturity exams, so she would be able to take her students to this marvelous place.

I believe one cannot deram of a more meaningful "thank you" and I wish you Anna to realise all of your dreams!

Eva Patzauer
wish-coordinator
Torremolinos, September 4, 2018.
... and how she felt about this unic experience? Read it in her words:

A heartfelt thank you goes to our supporters, the Prime Rate Ltd. and the leadership of Enersys Company,and also to our other private sponsors that allowed us to realise Anna's dream. We also thank Mónika and Juan for their kind support in Torremolinos. 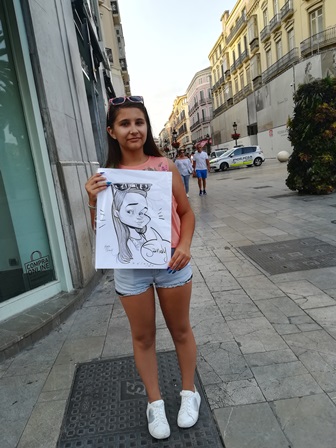 Alexandra's dream was to travel to the sea.

When I have asked what she wished to do there she has answered me modestly that to swim, to see the wildlife of the sea and if it is possible to see the countryside too.

When I have called her and her mom that we are planning to travel to Terramolinos in Spain, where we can grant the wish of Adam, one of her fellow patient's wish - to ride on the places where the Bud Spencer westerns were filmed - and Anna will also come, she agreed to join us with great pleasure.

I met the excited children and mums at the Budapest airport, and as our plane was delayed almost 4 hours because of foul weather, we had time to make acquintances. We arrived to the hotel very late that night.
In the morning Alexandra was very happy to see the fantastic blue sea from the balcony. She was smiling in the sunshine and even at the breakfast table; her good mood was steady during the whole trip.

Alexandra collected sea shells and stones, swimmed a lot in the sea and in the hotel's swimming pools. She prefered the pool on the roof because the sea could be seen from there, but her biggest favorite was the beach where she spent hours every day.


It was fantastic to see that the children felt themselves very well and knowing that their friendship will be kept for life. After the long days and lots of experiences, by dinner time they were very tired, but they were not tired enough not to taste in many rounds the local specialities at the reastaurant.

As Alexandra were interested also in the local wildlife and culture, she joined Anna and came with us gladly to the botanic gardens and of course to a very special place: a croocodile farm. Alexandra held in her arms a small (?), two years old crocodile. (I would have never done this, not even to touch such a beast...)

The other highlight of the trip was the visit to Ronda where we were walking the historical places of the city. We were in wonderful parks, we met very kind people and we have seen the old amphitheatre with a bull sculpture. Finally we had a short rest at the Palacio del Rey Moro, the arabic emperor's beautiful garden.

After our late flight home, Alexandra and her mom could spent the night in Budapest, as guests of ArtOtel, long time supporter of our mission.


As soon as she arrived home, Alexandra sent us a letter:

"I would like to thank the Magic Lamp Foundation for making my dream true and I could travel to Spain to the seaside. We have done and seen lots of interesting things like our visit to Ronda or the walks in Malaga. Besides the fantastic excursion I got two wondeful new friends, we talked a lot to each other and laughed a lot.
It is hard to find words of thanks to Éva as through her I could learn a lot about Spanish culture, and how the people lives there. And of course I thank the fun experiences to the others in the group, without them it would not have been the same."

I believe that we do not need nicer thanks, than these lines....

We would like to thank the support also in the name of Alexandra to Schneider Electric Ltd. , the management of the Enersys Company from the USA, and our other private sponsors, whose help allowed us to realise Alexandra's dream. We would like to thank also the management of ArtOtel for their generous contribution to Alexanda's joy.
We also thank Mónika and Juan for their help in Torremolinos. 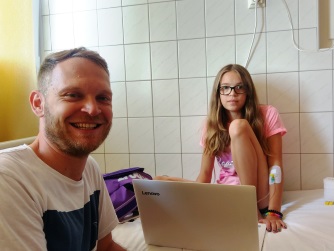 The 13-year-old Emma asked for a white laptop. She spends a lot of time in the hospital, and the laptop will help her with her studies, especially with her English studies.
Emma's favourite subject is English, and she loves watching movies in English.

We wanted to keep our arrival a secret, but Emma being a smart girl found it out. When we arrived with the big brown box, she already knew...

She happily opened the box, admired the beautiful pearly white laptop, and quickly switched it on. Meanwhile we started chatting about movies and actors, and she told us that her favourite actor was Johnny Depp. So we taled a bit more about our favourite Johnny Depp movies. Interestingly Emma's favourite is Sweeeney Todd:)

Dear Emma, we hope that you will enjoy your cool new laptop and you will watch many-many movies (after all the homework is done of course)

We would like to say a very special thank you to BlackRock Budapest for making Emma's wish come true and to Balázs Simonyi for being there and presenting the laptop on behalf of the company.