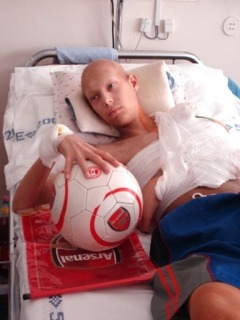 Ákos had been member of the local football team before illness attacked his body. However, he has still remained devoted football fan, and wished to participate on one of the matches of his favourite football teem, Arsenal.
Due to László Szabó's and Éva Kertész's help the great adventure was ready to start, when Ákos's condition suddenly turned to worse and the boy could not leave. We surprised him with a few Arsenal-relics hoping that these would ease his disillusionment and bring his favourite team closer. We hope that he will soon be able to play football in his new sportswear. Get well, Ákos! 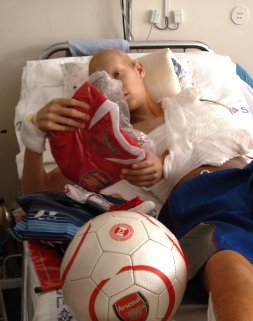 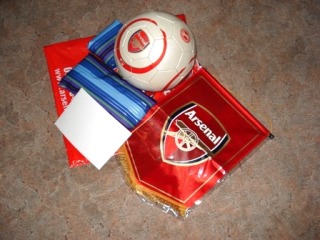 
Zsuzsi has always loved to draw and paint since her early childhood, therefore her wish was not a big surprise for us: she asked for drawing tools, brushes, paint and canvas. According to her mother, painting is the best medicine for the girl. She works even during her medical treatments.

We experess our thanks to the board and empoyees of the KOGART house, to Mr. Márton Takács and to the United Way Foundation for making possible Zsuzsis dreams come true.

The wish:
"Zoli is a devoted fan of the movie "Üvegtigris". He would like to meet the actor Péter Rudolf, who played the role of Lali, the hotdog vendor. He would like Lali to prepare a hamburger or a hotdog for him, but he does not want so much ketchup on it as in the movie. Zoli's other wish is to be taken for a ride on the Babetta motorcycle by Imre Csuja, who played the role of Csoki in the film.
The great event took place on the 14th of April 2006. The following photo report recalls a few moments of it. 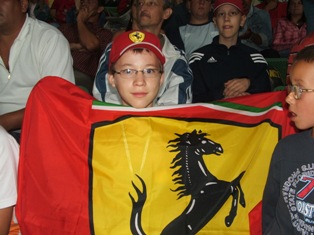 Krisztián had prepared a wonderful picutre for the long expected meeting with Michael Schumacher. It was not a surprise that the almost photolike-quality picture depicted Schumacher's red Ferrari. Michael was very much pleased by the picture, and first he did not even believe that it had been prepared for him. After having received the huge Ferrari flag with the signiture of the German celebrity, the evidently very happy kid was let into the stadium, where he could follow the charity football match. Krisztián cheered for his favourite pilot, who performed phenomenally - obviously just for the sake of the Wonderlamp wish-kids.
But wonders did not end at this point: Krisztián was allowed to the Saturday qualifying session where he could keep his fingers crossed for Schumacher. Despite the 2-second penalty, the pilot did not disillusion his devoted fan. Thanks to everybody who had helped us to grant this wish, providing an unforgettable experience for Krisztián.

We experss our thanks to Shell Hungary for providing the tickets, to Careers Management Group and to the representative of formula.hu for arrangeing the meeting.
According to Mr. Schumacher's request we may not edit pictures of the event.