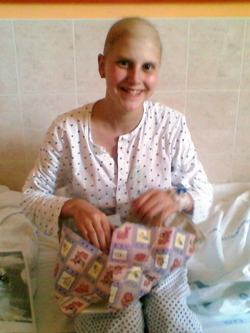 Noémi wished to have a camera.

Once we arrived at the clinic, she had a bad mood as her lab results became worse. Once she realized we’ve arrived she became very happy and was pleased to take over the presents.

She opened the camera and has immediately tried it. We took some photos, too. It was very nice to see her happiness!

We wish you to get well as soon as possible and we wish you can prepare lots of nice photos.